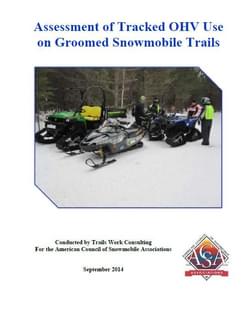 This project builds upon a similar assessment conducted by Trails Work Consulting in 2005-2006 on behalf of the International Association of Snowmobile Administrators (IASA) and the American Council of Snowmobile Associations (ACSA). The 2006 study can be viewed here. Since the 2006 project addressed only wheeled ATV use on groomed snowmobile trails, this project focused on filling information gaps related to tracked OHV operation on groomed trails.

For this project’s Trail Manager Survey, the term ‘OHV’ generally included three off-road recreational vehicle types equipped with either wheels or tracks: ATVs, UTVs/ROVs (also known as side-by-sides), and motorcycles. Wheeled OHVs were included in the 2013-14 survey only to compare 2006 wheeled survey data against current data. This project’s limited 2014 field test evaluated only one tracked ATV and two tracked ROVs – no tracked motorcycles were tested. While no wheeled OHVs of any type were field tested in 2014, some comparisons were made with 2006 field test observations that included wheeled ATVs.

ACSA is a national organization uniting the snowmobile community and promoting snowmobiling as a safe, fun and environmentally friendly family sport.