At approximately 631 miles in length (the suitability of various river channels will vary the exact route for different types of watercraft), the trail is considered to be the longest in a single state in the U.S. 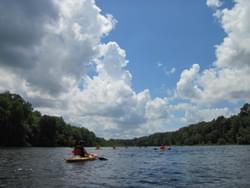 The Alabama Scenic River Trail opened in June of 2008 as a recreational and tourism trip destination for paddled and powered boats. At approximately 631 miles in length (the suitability of various river channels will vary the exact route for different types of watercraft), the trail is considered to be the longest in a single state in the U.S.

The Trail then proceeds along the Mobile River and through the Tensaw-Mobile delta, along the Tensaw River and its tributaries to Mobile Bay. To avoid maritime traffic, paddleboats such as canoes and kayaks follow a slightly different route to the Trail's terminus at Fort Morgan.

The Trail is designed to be clean and hospitable, and activities of the Trail Association will include conservation stewardship, and outreach projects, to ensure the Trail's family-friendly aspect. 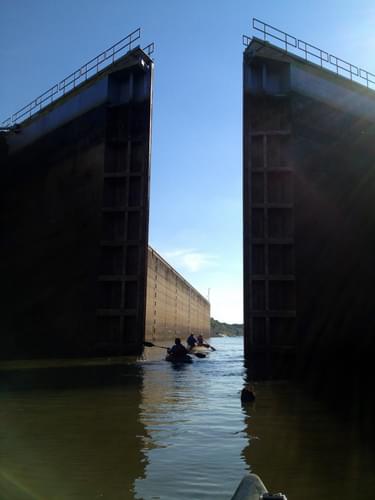 The route, suitable for every kind of craft from canoes and kayaks to powerboats, begins in the mountainous terrain of northeastern Alabama, flows through beautiful scenery in nine lakes, through the serenity of the second largest river delta in the United States, through Mobile Bay, terminating at historic Ft. Morgan.

The Trail passes many points of historic interest, all of which are described in Trail Guides that will be available in the spring. These guides will include information on all aspects of the Trail.

Alabama contains many species, some of which are found nowhere else. The Trail passes several established birding trails, includes many of the country’s best fishing grounds, and connects to the highly-regarded Bartram Canoe Trail in the delta area.

Thornton Clark was a key leader in the many efforts to make the concept of the Alabama Scenic River Trail a reality. His research, recommendations, and dedication led to the designation of the route as a National Recreation Trail in 2008. Thornton was recognized for his achievement at the 2008 National Trails Awards at the National Trails Symposium hosted by American Trails in the Quad Cities of Iowa and Illinois.

Thornton's knowledge of the river, boating in general, and his cooperation with others. Fred Couch of Calhoun County, AL, was the person whose vision of this long-distance water trail and began the long process from concept to reality. Among the people he contacted with his idea was Thornton Clark of Montgomery, AL.

Thornton is a retired travel agent who is a boating and sailing enthusiast. His experience in boating along the Atlantic seaboard and many intra-coastal waterways was essential to getting the trail project going. Thornton's father had canoed down the Alabama River from Montgomery to Mobile in 1911. Following in his father's tracks, Having learned about Alabama's rivers from a young age, Thornton set out on the identical trip when he was 17 years old.

The route of the Alabama Scenic River Trail across the state

Thronton researched the history of the rivers and creeks along the proposed trail route. He made recommendations on the route and always had thorough justification backing his proposals. He developed the most thorough collection of GPS coordinates for facilities, campgrounds, and access points that have ever been put together for the region. Thornton attended meetings of trail planners, visited proposed portages, and traveled through Corps of Engineers locks. He worked tirelessly to assist those who were developing guidebooks, brochures, maps, and a website.

Thornton identified the facilities needed for visitors to plan water trips of longer distances. Recognizing that the lack of fuel and supply stops along the trail would be an obstacle, he made personal visits to business and agency leaders. Using his knowledge of fueling facilities along waterways in other states, Thronton lobbied for policies that would permit businesses to offer fuel along public waters.

The Alabama Scenic River Trail Association publishes four trail guides, each describing in detail the route through a portion of the Trail, providing information regarding campgrounds, marinas, put-in and take-out locations and points of interest along the way. Although the Alabama Scenic River Trail Association suggests more detailed maps, especially in the Delta, maps outlining the Trail’s route and key facilities including fuel stops for powerboats along the way are included in each of the trail guides.