A Tale of a Trail: Boardwalks for Woodinville 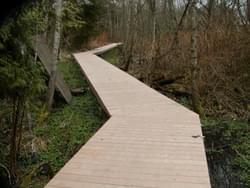 In early 2001 the city of Woodinville, WA (East and North of Seattle, WA) in partnership with several private/non profit organizations wanted to restore, develop and implement habitat protection in an 18 acre park (see fig 1 master plan pic). Given the location and existing wetlands within the proposed site, they knew they had an uphill challenge ahead of them.

The site is home of Little Bear Creek with approximately 2,300 feet of creek frontage running north to south. To complicate matters further, six salmonid species including the endangered Chinook salmon use Little Bear Creek for spawning and migration. In the Northwest this means tread softly, very softly!

With the help of designer, Lesley Wiscomb, R.L.A. of Wiscomb Landscape Architecture Services Inc, a Master Plan was developed, broken out into 3 phases and implemented. Phase one involved the construction of a skate park consisting of approximately 1 acre at the very southern end of the park where 2 homes had previously been located. Phase two was the construction of a playground and picnic areas next to the skate park. The hardest and most challenging was left for last, development of a gravel/boardwalk trail system that would meander through the very environmentally sensitive areas of the park and would include viewing platforms overlooking the creek and restored areas of the wetlands. 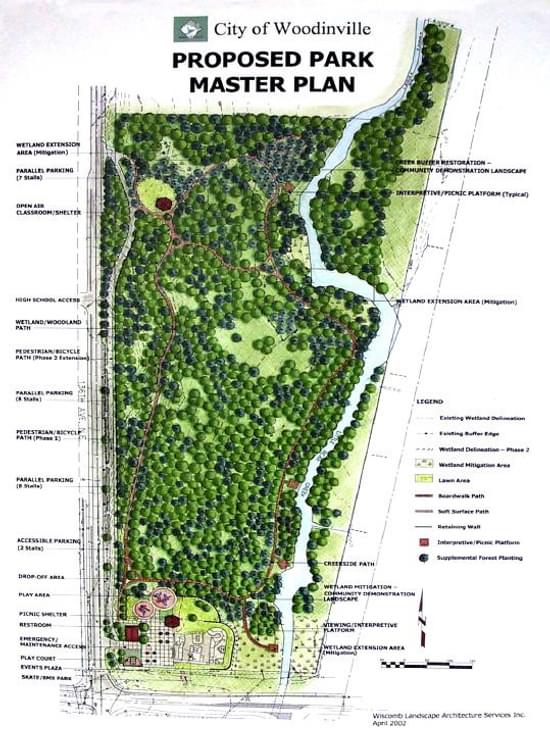 Master Plan for the park and trail system in Woodinville, WA

The trail system would be used as an outdoor environmental classroom for local students and the general population featuring interpretive signs as well as 4 viewing platforms to observe Salmon spawning/migration and the wetland areas. The interpretive materials which included a "restoration manual" would actually be incorporated within the local school systems curriculum and be used as an ongoing case study.

To better understand the scope of the trail, 1,470 feet of the proposed system would touch the wetlands while the remaining 1,725 feet would lie outside. The four viewing platforms and the boardwalk itself would all require special and creative construction techniques to avoid impact on the wetland and Little Bear Creek itself.

Because the project site had previously been developed to a minor extent and had non- native species throughout the site, a number of critical studies were conducted.

The following laundry list of projects was required prior to construction: 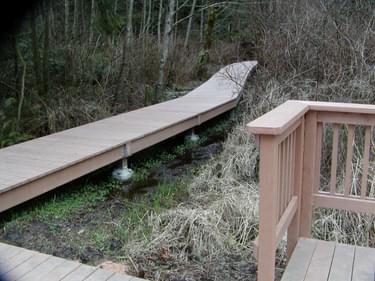 A large cadre of volunteers, including students, members of Woodinville Rotary, and local residents banded together and the work began.

Given the proximity of the boardwalk to the wetlands, the use of treated lumber was eliminated early on in construction discussion. The designer, Leslie Wiscomb in cooperation with Gray and Osborne Engineering of Seattle, WA proposed the use of a new and unique plastic structural lumber. Not only would the use of structural plastic offer a tremendous cost savings over the life of the boardwalk but as a 100% recycled product derived from plastic milk jugs and plastic soda bottles, it closes the all important recycling loop. This was very appealing to the city and fit in with the overall design and environmental theme of the park.

After researching several different products, Grey and Osborne Engineering suggested Ecoboard©, a product manufactured by Trelleborg Engineered Systems of Clearbrook, VA. Ecoboard© is a 100 recycled plastic lumber with a 50 year guarantee that is inert in the environment and offers the structural strength via fiberglass filaments and/or fiberglass rebar. The increased structural strength that the rebar provides allows the joists to span non-traditional lengths and thereby reduce costs compared to traditional construction methods. After consultation with the manufacturers' engineers, and the Schrader Company (Trelleborg's Western States Representative) Ecoboard© joists in 3x10 dimensions were determined best in order to meet the load requirements with 2x6 Ecoboard© decking on the top. Due to the wetland environment, the boardwalk and the viewing platforms would have to be constructed on pin pilings to avoid fill and of course limit the impact on the wetlands.

The City of Woodinville hired a local general contractor to lay the joists, and then the volunteer network stepped in to lie the decking. The final phases of the project are still under construction, but the majority of the trail work is complete. The park will be used in the near and long-term future to educate students and visitors alike of how a habitat can be restored and how trail/boardwalk systems can exist in an environmentally sensitive area. 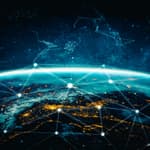 Levaware systems is offering IoT intelligence to create a new type of trailhead. 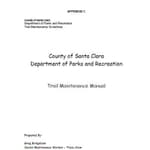 This Trail Maintenance Manual was developed as a field guideline and procedure manual for Park staff responsible for the maintenance, construction, and operation of the Santa Clara County Parks trails’ system. 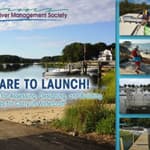