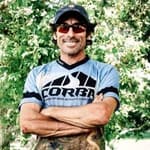 Steve has been riding bicycles in the mountains around Los Angeles for 35 years. After more than 20 years riding trails, he saw trail conditions gradually deteriorating through lack of maintenance, and diminishing agency budgets. He began doing volunteer work with CORBA’s trail crew in the early 2000s, and before long was leading crews himself. He worked on trail master plans and other planning efforts as a volunteer committee member with CORBA in the mid-2000s. He joined the CORBA board in 2009 and became board president in 2014. Steve has led trail reconstruction efforts in the wake of the Station Fire, Sand Fire and Woolsey Fire. He’s leveraged partnerships with other user groups, bike industry, nonprofits and land managers to build new trails, create a bike skills park, and continue ongoing trail maintenance efforts. He served on the CAMTB steering committee during its development, and now serves on the board of this new regional organization, as well as two other nonprofits and a Collaborative advisory group for the San Gabriel Mountains National Monument.