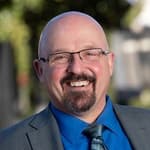 After serving onboard an aircraft carrier in the United States Navy in the late 1980’s, Scotty began his 24 year career in 1991, serving and leading Joint Powers Authority agencies. Scotty has a Bachelor’s Degree from Saint Mary’s College in Business Management and a Master’s in Leadership. Scotty also has several years of volunteer service with California State Vehicle Recreation Areas. Scotty joined the City of Modesto in January of 2019 as the Deputy City Manager of Operations.

Resources & trainings by Scotty A. Douglass