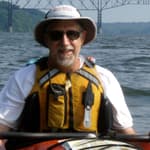 Scott Keller is the Acting Executive Director for the Hudson River Valley Greenway and the Hudson River Valley National Heritage Area. He is responsible for all aspects of the Greenway and NHA. Prior to becoming Acting Executive Director Scott worked on all aspects of the Hudson River Greenway Trail system. Scott was responsible for the development of the Hudson River Greenway Water Trail (HRGWT), a 256 mile, 117 site water trail from Whitehall, New York to Battery Park in Manhattan. In 2012 HRGWT was named one of the first nine National Water Trails by the US Department of the Interior. He has served on the Hudson River Watertrail Association Board of Directors since 1994. He also previously served on the North American Water Trails Board of Directors. In 2013 Parks and Trails New York presented him with their Public Leadership Award for his work on HRGWT. He is married, has three children and lives near Albany. Paddling has been an integral part of his life since he was a child. Prior to his transfer to Albany, he commuted to work by canoe across the Hudson between Ulster and Dutchess Counties.