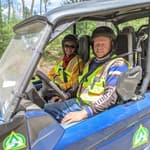 Randy Harden is the program administrator for the trail ambassador program, as well as the president of the Wisconsin ATV / UTV Association. Randy has always been involved with off-highway vehicles going back to the 60's. During the 1980's, Randy became involved with the conservation efforts and safety education when his children became interested in following in his footsteps. Randy became the president of the then Wisconsin ATV Association in the 90's where he helped grow the ATV program in Wisconsin. Randy has helped start many local chapter ATV clubs throughout Wisconsin. He also is a former ATV Safety Institute Safety Instructor and a current Wisconsin Department of Natural Resources safety instructor for the ATV safety program. Randy sits on the Wisconsin State Trails Council, which works on common issues with various trail user groups in Wisconsin.