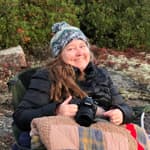 Rachelle Wright is the project director for Cave Country Trails, one of the managers of the Green and Nolin Rivers Blueway, a designated National Water Trail. With a background in education and federal programs, she is also now heavily involved in the tourism industry. Starting on the frontlines, she is now the lead consultant for Kentucky Content - where she helps a variety of tourism entities with digital marketing. When not focused on trails and tourism, she can be found enjoying the company of farm animals and family on the banks of the Green River.

Cave Country Trails is a non-profit that exists to get people on trails in a five county region of Kentucky that includes Mammoth Cave National Park. It began with public input sessions, conducted in partnership with the Rivers, Trails and Conservation Assistance Program. During Wright’s tenure she has assisted with the realization of the National Water Trail designation, promoted their newly designated US Bike Route 23 and led campaigns that focus on trail use for health and as an economic builder.