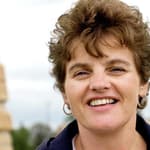 Kim has been the Grand Forks Greenway Specialist since 2002, where she provides oversight of the daily operations and management of the 2,200 acre greenway in all areas managed by the City of Grand Forks. She is a lifelong resident of Grand Forks and brings a historical perspective to the Greenway and flood protection project, and its impact on the community. Kim takes a holistic approach to greenway management, as it is easy to forget that the Greenway is almost three times the size of the 843-ace New York City Central Park. Her responsibilities include overseeing development of the Greenway, in partnership with city, state, federal agencies and citizen groups. She also helps to market and promote the Greenway. Kim lives in Grand Forks with her husband, Erland.