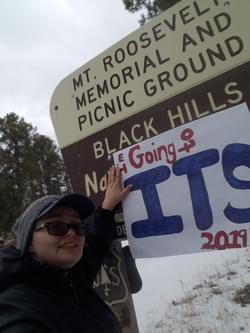 With the skills I learn at the 2019 International Trails Symposium and Training Institute, I will continue to build on the knowledge of trails. I want to take what I learn and share with the Forest that I work on and with the trail committee for these other federal agencies, local governments, and the volunteers to learn more. The development in the area is hard to keep up with just one agency and we have a great community that wants to help build trails for themselves and the tourists. I plan on continuing on career in conservation after my internship so I want to absorb as much as I can. Going forward I am unsure with the shutdown and reading the most negative comments on the internet about federal employees and “well that’s the job they chose” and “when a real American loses their job, they go get new one… not our problems”. I’m very unsure about the whole career move. The community is supportive but definitely has me second guessing how to move forward. So hopefully we get back to work and that changes but I think being around people that chose similar field will help because it’s even hard to describe my whole job to outside people and it’s been a stressful month. I work in Lands and Recreation, Special Uses with the US Forest Service through a non-profit called Mobilizegreen.

Currently I am working on the Mt Roosevelt Friendship Tower 100th Anniversary rededication planning and new trail signs design. We have a rich history that involves a great President, Theodore Roosevelt, and his great best friend, Seth Bullock. Seth Bullock asked the Black Hills Pioneers (local mason chapter in Deadwood, SD) after the death of the 26th president, TR, to build the Friendship Tower. This Tower was gifted to the US Forest Services in 1966. The Forest Service has done some restoration on the Tower. The trail is maintained to the original area with additional observation deck that looks over the plains where the two met. Both men where hunters and believe conservation was important. My project taught me to appreciate the conservation efforts that were pushed in the earlier day and the beginning of the Forest Services, Pinchot and Theodore Roosevelt doing, more. Seth Bullock was a Forest Supervisor in the Black Hills Forest Reserve which became the National Forest.