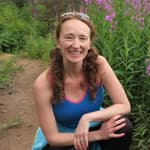 Kate joined American Hiking in 2017. She brings a wealth of advocacy experience from the ONE Campaign, where she was a Policy Director, setting policy and strategic direction for ONE in the areas of agricultural development, hunger and nutrition, climate change, energy poverty, women and girls, trade, and development in fragile states. Prior to ONE, Kate served as Chief of Staff and Senior Policy Advisor in Secretary Clinton’s Office of Global Food Security, helping to lead the Obama Administration’s flagship global hunger initiative, Feed the Future. Kate joined the State Department initially under a fellowship with the American Association for the Advancement of Science and focused on the intersection of emergency humanitarian aid and terrorism and hunger-related United Nations negotiations. She started her career as a planetary and glacial geologist, participating in several NASA Mars missions and working with the International Space Science Institute in Bern, Switzerland, the University of Copenhagen’s Neils Bohr Institute, and the Smithsonian Center for Earth and Planetary Studies. She earned her Ph.D. in Geological Sciences from Brown University in 2004. Kate hails from Montana, where she developed a deep passion for spending as much time outdoors as possible. She and her equally outdoorsy husband and two daughters live in the ancestral lands of the Piscatoway (now known as Silver Spring, MD).