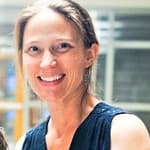 Julie Smith is the Executive Director of TRED (Trails for Recreation and Economic Development) Rome Floyd, the only non-profit trail advocacy group in Northwest Georgia. Julie helped to found TRED in 2012 and served as board president until she stepped into her current role in 2020. Julie's past experiences include working in the media industry, higher education, and from 2007 to 2019 she and her husband owned and operated a community bicycle shop in Rome. TRED began when the county commission voted against a federal grant that would provide a critical connection in the Downtown Rome multi-use trail network. Citizens rallied and raised the needed matching grant funds saving the project and TRED was formed.to enhance, promote, and expand the 13-mile trail network to connect neighboring communities. TRED has built over 15-miles of mountain bike and hiking trails in Rome and Floyd County and has partnered with the city and county governments to fund and construct over 6 additional miles to the current urban trail system. Julie is grateful that she gets paid to walk, run, and bike on the trails.