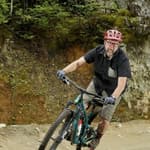 Since 2005, Joe Jacobs has served as the manager of Marketing and Revenue for the State Parks Division of the Arkansas Department of Parks, Heritage and Tourism. In this role, he manages the division’s marketing program, including the Division’s $1.5 million annual advertising program, and oversees the revenue producing operations ($29 million annually) for Arkansas State Parks.

He coordinates Arkansas State Parks’ promotional efforts in print, broadcast, outdoor, and online media. These include turnkey projects developed and implemented by Division staff plus those done by the department’s advertising agency, CJRW of Little Rock, and Web designer, Aristotle Internet of Little Rock.

Bicycling has became more than a hobby for Jacobs, he provided technical assistance in the creation of the Bicycling in Arkansas brochure. He wrote the Arkansas Bicycle Safety Manual. Jacobs was also the first guest editor for the Arkansas Times publication, Bike Arkansas and has contributed articles for subsequent issues. He represents the department as the chairperson of the Governor’s Advisory Council on Cycling, a group with the goal of improving the bicycle friendliness of Arkansas through state agency and private sector cooperation.

Trails are a passion for Jacobs, he has served as president of the Central Arkansas Trail Alliance. He has also been instrumental in the design and creation of mountain bike trails at Pinnacle Mountain State Park, Woolly Hollow State Park and Boyle Park in Little Rock.

Prior to joining the Arkansas Department of Parks and Tourism, Jacobs was employed in the private sector at several major retail organizations in the U.S. He holds a Bachelor of Science degree in Business Administration with a concentration in Marketing from the University of South Carolina.

After living in 15 different states and traveling all over the world in the Navy, Jacobs settled down in Little Rock, Arkansas with his wife, two daughters and son.