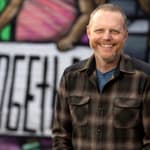 Jason has been involved in the outdoor industry professionally for almost 40 years and recreationally his entire life. His early outings centered on backpacking in the mountains of North Georgia with his father. In 1986, when Jason was 11, his father moved to Greensboro, NC and opened a small outdoor store called Appalachian Outfitters which specialized in backpacking, climbing, and paddling equipment. Mentors were easy to find in this outdoor community and it wasn’t long before Jason found himself on rocks, rivers, and bigger mountains around the world. These trips led to a deep appreciation for wild places and a strong connection to the natural world. Jason has a Master’s degree in elementary education and has been a fourth grade teacher, climbing guide, wilderness therapy instructor, and camp director. Jason has been at Camp Grier since 2013 and enjoys spending time outside with his family and generally moving around in the mountains any way possible. His greatest joy is sharing summits, rivers, and trails with friends.