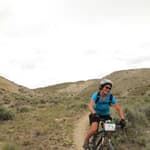 Gina joined the staff of Salmon Valley Stewardship in July 2006 and became the executive director in January 2007. She has served as a Salmon City Council member and on the board of directors for the Salmon Arts Council and the Lemhi Afterschool Promise nonprofit organizations. In 2010, she was appointed to the Lemhi County Planning and Zoning Commission and in 2013 named the vice-chair of the commission. She is an appointed member of both the Idaho Governor’s Lewis and Clark Trail Committee and the Idaho Economic Advisory Council. She serves on the steering committee of the Rural Voices for Conservation Coalition. Prior to moving to Salmon with her family in 2002, Gina worked as the environmental public affairs officer for Mountain Home Air Force Base. She later worked for the engineering firm CH2M Hill’s Boise office as a technical writer and editor. Gina enjoys writing, mountain biking, hiking, whitewater rafting, and watching and playing hockey with her beginner women’s team.