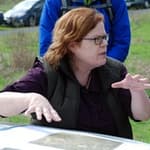 Elaine Stewart is a Senior Natural Resources Scientist with Metro, a regional government in Portland, Oregon. She is a project manager for natural area restoration projects, managing and overseeing feasibility analyses, project scoping, development of project funding, project implementation, and evaluation of project effectiveness. Her ecological restoration projects encompass nearly every ecosystem in the lower Willamette Valley and include rare plant and wildlife conservation. Prior to joining Metro in 1996, Elaine worked for the Oregon Department of Fish and Wildlife for many years in marine recreational and commercial fisheries management. She completed her B.S. degrees at Oregon State University’s Department of Fisheries and Wildlife, and she holds a M.S. in Fisheries and Wildlife from the University of Missouri.

Elaine became interested in wildlife and trail issues when she witnessed struggles between wildlife advocates and trail proponents, often fighting over small strands of natural habitat in urban areas. She joined Robert’s team on the Westside Trail project, where the two collaborated to find a better way to address habitat issues and opportunities in urban trail planning. They are now reaching out to share their lessons learned and gain from the experience of others.