President with Partnership for the National Trails System (PNTS) 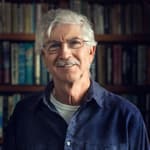 Barney Scout Mann is one of the rare individuals who have hiked America’s Triple Crown of Trails: the Appalachian, Pacific Crest, and Continental Divide Trails. Backpacker magazine calls Mann a “master storyteller” and National Geographic dubbed him “arguably the dean of America’s long-distance trails.” His connections to the PCT run deep, as each spring for the past fifteen years he and his wife Sandy have hosted hikers starting out on the PCT (more than 7,000 to date) at their San Diego home. In Journeys North, Mann tells the compelling story of six hikers on the Pacific Crest Trail--part action thriller, part armchair adventure, and 100% endorsement for hitting one of the most fascinating trails on earth. Mann’s account provides a ringside seat for the challenges, the agony, and the pure joy of long-distance hiking. Mann is president of the Partnership for the National Trails System and his writing has been featured in Backpacker, the Portland Oregonian, and the New York Times online. Follow Barney Scout Mann on his author website or Instagram.