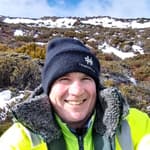 Alister "Al" Clark is the City of Hobart’s project manager for the Organ Pipes and Pinnacle tracks rejuvenation works. Al came to the City of Hobart to do practical work after completing a PhD in surveying at the University of Tasmania, which he finds is a far happier and healthier way to spend a working day. In Tasmania, he has worked as environment and Heritage manager for the Department of Defence, and for Greening Australia in community landcare and other environmental projects.

Al started his career as a bush regenerator and seed collector in Sydney and Northern NSW. He has also worked in the Northern Territory on Landcare and Bushfire management projects. Al is married with two teenage daughters, likes walking, gardening, reading, fishing and recently started playing soccer again.