The Coalition for Recreational Trails

Dedicated to the protection and enhancement of everyone's right to health and happiness through recreation.

CRT sponsors the Annual Achievement Awards as part of the ongoing effort to build awareness and appreciation of the importance of RTP funding to States across America. 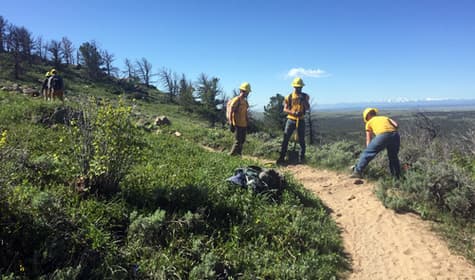 About The Coalition for Recreational Trails

The Department of Transportations' Federal Highway Administration administers the RTP program that provides funds to the States to develop and maintain recreational trails and trail-related facilities for both nonmotorized and motorized recreational trail uses. RTP funds come from the Federal Highway Trust Fund, and represent a portion— less than one third— of the motor fuel excise tax paid into the Trust Fund from non-highway recreational fuel use. Since 1993, more than 23,000 RTP-funded projects have been funded nationwide and are documented on the RTP database: www.recreationaltrailsinfo.org.
The RTP leverages hundreds of millions of dollars of additional support from other sources for trails, encourages productive cooperation among trail users, and facilitates healthy outdoor recreation and economic activity across America.

During the six years of ISTEA, CRT worked to ensure that program was continued and strengthened as part of the ISTEA reauthorization process. Following the 1998 passage of the Transportation Equity Act for the 21st Century (TEA-21) and the 2005 approval of the Safe, Accountable, Flexible, Efficient Transportation Equity Act: A Legacy for Users (SAFETEA-LU), both of which significantly increased RTP program funding. CRT’s efforts focusing on RTP’s continued, effective implementation resulted in the reauthorization of RTP with dedicated annual funding of $85 million for Fiscal Years 2013 and 2014 in the Moving Ahead for Progress in the 21st Century Act (MAP-21). CRT efforts are now focused on continuing and enhancing the RTP in the next round of transportation legislation.

CRT also sponsors the Annual Achievement Awards as part of the ongoing effort to build awareness and appreciation of the highly successful Recreational Trails Program. Outstanding projects funded by RTP are honored at the awards ceremony on Capitol Hill in June hosted by the Coalition for Recreational Trails during the annual celebration of Great Outdoors Month.

As a member of the Coalition for Recreational Trails, American Trails urges organizations of every size and interest to become a Supporter of the Recreational Trails Program. CRT has created a Council of Advisors to help support the continuation and expansion of the Recreational Trails Program in upcoming legislation, as well as to encourage State Governors not to “opt-out” of the RTP under the current FAST Act. By joining the Council, the Advisors agree to sign on to letters supporting RTP that will be sent to Members of Congress, the Administration, or to relevant State Governors and/or Legislators. In addition, Advisors are asked to recruit other RTP supporters and to help in a variety of ways.

To date, over 500 organizations have signed on as members of the CRT’s RTP Council of Advisors.

Back Country Horsemen of America