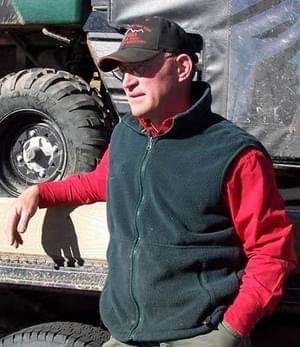 Tony Simek is an active member of the Cody Country Snowmobile Association.

Tony has been riding snowmobiles since he was a kid. When he lived in Wisconsin, he raced when he was in Middle School and High School. He has ridden many makes and models of snowmobiles. He used to attend the Eagle River races in Wisconsin.

He moved his family to Cody, Wyoming in 1990. At the recommendation of Bill Holder, Tony and his family joined the Cody Country Krazy Sleddrs snowmobile club (aka Cody Country Snowmobile Association) and the Wyoming State Snowmobile Association. He has held many offices with our local club. He has been a director, Vice-President and President. He was also involved in our local Search and Rescue. He has won awards like, Snowmobiler of the Year, Family of the Year, and Groomer of the Year.

Tony spends his winters promoting, grooming, embarking on search and rescue missions, and enjoying the trails of the Beartooth Mountains, which he helped to open to snowmobilers after working with the U.S. Forest Service to maintain to system.

Tony is extremely involved in keeping our Trail Systems open. He works closely with the State Trails program as well as the Forest Service for our trail system. In the ‘90’s he was involved in raising money for the Cody club to purchase a groomer to help keep the trails groomed. The Forest Service was going to shutdown the trails in the Beartooth Mountain range because the trails were not being maintained. Tony and other club members raised the money, purchased a groomer, worked out a deal with the State and started to groom the trails. The club members rotated schedules to keep the trails maintained. Then in 1998 Tony purchased his own groomer and had the grooming contract with the Wyoming State Trails to maintain the trail system.

Tony helps to lead our club to clear trails in the fall and mark the trails in the winter. Tony was also involved in the Cody club purchasing a semi-trailer which would then be converted into a warming hut to put in the Beartooth Mountains. This warming hut has saved many snowmobilers and has become a great place for people to meet and get out of the cold for a little while. Tony is very involved with helping to maintain our existing warming hut (which we recently renamed as a Safety Shelter). Recently Tony was involved with the club in locating a larger semi-trailer to replace our existing Safety Shelter.

He has been involved in the partnerships of Federal and State agencies in the planning of new trails. Tony was part of a group that started the Wyoming State Racing Association. He has always been very active in the racing aspect of snowmobiling.

He now has grandchildren that love to ride. He enjoys taking them riding and teaching them how to be safe riders.

In closing, Tony has always been a very valuable person to our club and to the sport of snowmobiling. The greatest thing about Tony is his love for the sport of snowmobiling and it shows every time you meet him on the trail. If you are a snowmobiler he is one of the best people to have around. Tony will always give you good advice and if you are broke down he is one the first people there to give you a hand to get you back on the trail.