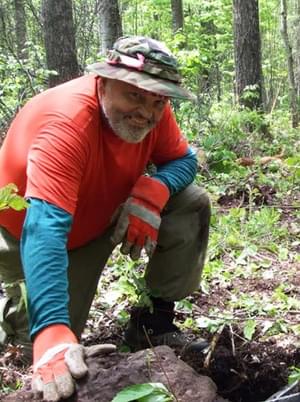 Dick Kroener is one of those people who thrives on volunteerism in a multitude of ways.

He volunteers for a wide variety of activities, including trail work, Habitat For Humanity projects, and removal of invasive species on public lands.

Near his home territory (which is the Minneapolis-St. Paul area of MN), he has volunteered for years to remove invasive species from State Park properties. On this task, he works throughout the year principally pulling and cutting Buckthorn in Minnesota state parks near the metropolitan area. Normally, this work is done alone and he often goes out daily to remove more of these obnoxious plants.

Bill Menke, the North Country Association’s Trail Regional Trail Coordinator for the state of Wisconsin, first met Dick after he had stumbled upon a Chequamegon Chapter workday and shortly afterwards contacted him to work on the Brule-St. Croix Roving Trail Crew in 2002.

Since that time, Dick has participated in almost every crew outing of the Wisconsin group, accumulating 2,470 hours just with the crew. With this significant total, Dick is the holder of the record for the crewmember with the most hours. When you consider that a full time work year equals 2,080 hours, you can see that just through crew volunteerism, Dick stands at almost 1.2 yearly equivalents. Granted, while most crew work revolves around trail construction, it does demonstrate his deep commitment to volunteerism. And quite frequently, Dick arrives a half day or more before the rest of the crew and uses that time to perform mowing or other trail maintenance on nearby segments, that he knows are in need of maintenance, while waiting for the crew to assemble.

Dick was also instrumental in encouraging a friend to join him in adopting a long neglected segment of trail within the Ottawa National Forest (the Ni-Miikanaake Chapter area in the UP of Michigan). Dick and his co-adopter travel all the way to the UP several times each year to perform maintenance on their segment. His adoption of this segment was actually the seed that led to the initiation of a Trail Adoption system within the then fledging Ni-Miikanaake Chapter. In addition to all of the above, Dick is also a valued volunteer of the Superior Hiking Trail Association— where he serves as a campsite adopter, trail maintainer, trail builder, and has participated in the construction of a number of bridges.