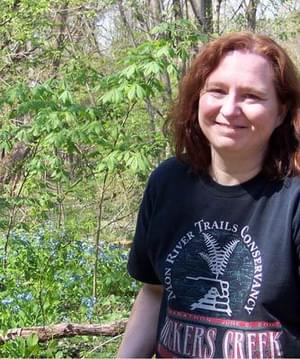 Ella became the first Executive Director for the Monongahela River Trails Conservancy in 2000 and helped develop and implement a trail management plan that includes many agency and community partnerships.

Since then the Mon River and Deckers Creek Trails have expanded from a 29-mile trail to 48-mile trail network that spans three counties in North Central West Virginia. The trails have been nationally recognized as models for trail management and design. The West Virginia Department of Highways and MRTC were honored with national recognition from the American Association of State Highway and Transportation Official (AASHTO) in the form of AASHTO’s “2000 Award of Excellence” and in 2006 the trails were designated National Recreation Trails.

Ella also has worked closely with other trail groups to link the Mon River and Deckers Creek Trails with neighboring developing rail corridors. As the Fayette County Commission negotiated with CSX to purchase the Sheepskin Trail corridor in Pennsylvania, they were confronted with new soil management requirements from CSX. Realizing that this would also greatly impact the future of new rail-trails in West Virginia, Ella took the lead in order to draw attention to this new rail-trail development challenge. She has spoken at a WV Brownfield Conference, met with CSX representatives, and initiated a working group that includes leaders from the WV Department of Environmental Protection, WV Northern Brownfields Center, WV Department of Transportation, the National Rails-to-Trails Conservancy, National Pak Service RTCA program, and groups working to acquire rail-trail corridors. This group is aiming for an outcome that will be a practical, pro-active process for meeting the CSX requirements that will not stall rail-trail purchase negotiations or overwhelm groups trying to build rail-trails in their community.

Ella became interested in the outdoors and conservation at an early age, camping with her family in the beautiful state parks of West Virginia. After college she began interning with the US Fish and Wildlife Service at National Wildlife Refuges in Virginia, Nevada, Oregon and Guam. Upon returning to West Virginia to pursue a M.S. degree at West Virginia University, Ella began volunteering for the Mon River Trails Conservancy and was excited to have a paid opportunity to help expand the local rail-trails length and popularity. MRTC has turned an abandoned rail corridor into a trail system that is repeatedly described as the best thing to happen in the region of North Central West Virginia in the last 50 years.