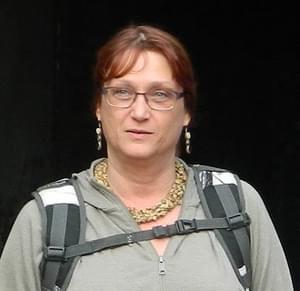 Diana is an avid bicyclist and hiker, and a long-time member of the Rails-to-Trails Conservancy.

Diana has lived and worked in the Clarksburg, West Virginia area for nearly 25 years.

In 2016, Diana became the first President of the newly formed Harrison Rail Trails (HRT), Inc. She built the Board of Directors, led the organizational development of the group, and has shown her skills as an avid information-sharing leader.

Diana started a weekly Gratitude Walking Group. Sidewalk-chalked positive messages are written on the asphalt section of the trail each week. Diana has dedicated herself to spending time on the trail during various times of the day and night in all types of weather. Diana also organized a self-defense workshop on the rail-trail.

Working in close cooperation with the county, Diana and HRT have partnered to rehab and extend the rail-trail system. The future is bright for making connections and getting more people using the trails, resulting in additional active lifestyle opportunities for Clarksburg residents.