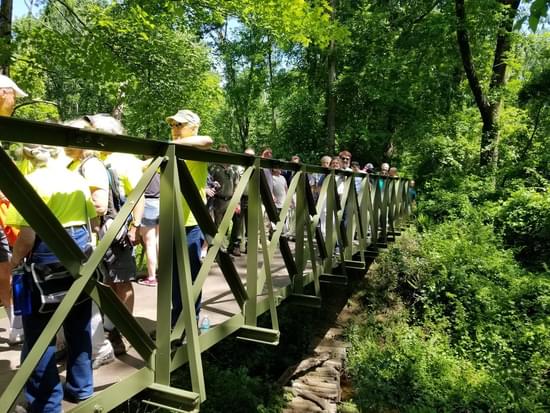 The new Waterloo Valley Trail Bridge along the Morris Canal Greenway in Allamuchy Mountain State Park significantly upgrades the quality of the trail, increases users’ safety, and enhances protection of the environment.

Prior to installing this 6-foot wide, 60-foot-long bridge, trail users had to navigate down a steep embankment to stream level which is about 15-feet below the current bridge. An old, narrow, and unstable make-shift bridge had been assembled by trail users from logs found nearby and placed in the stream in order to cross. Not only was this makeshift crossing unsafe and inaccessible to many trail users, but it was interfering with the natural flow of water through the stream. The new bridge is much wider, allowing users to cross paths in opposite directions and allows for the trail users of all abilities to continue along a level at-grade path across the stream. With a maximum load of 9,000 pounds and high railings, the bridge is extremely sturdy and safe and, situated about 15-feet above the stream, enhances protection of the environment by allowing the stream and wildlife to pass beneath undisturbed.

Along with the new trail bridge, we not only installed two trail gates nearby to prevent unauthorized vehicles from accessing the trail, but we also expanded and improved a gravel parking area at the Bilby Road trail head and installed a trail kiosk there with custom interpretive signage and map showing the 5-mile Waterloo Valley Trail Segment of the Morris Canal Greenway.

The new Waterloo Valley Trail Bridge is a shining example of cost-effective partnership between public and private entities which increases access to, and use of, state and local public lands. Since 1981, the County of Warren has helped lead efforts to create the Morris Canal Greenway across northern New Jersey and in doing so has acquired many properties containing this historic canal. One such property adjoins Allamuchy Mountain State Park, through which the canal continues, but a breach in the canal towpath (historically used by mules to pull the canal boats with ropes) prevented most users from following the trail any further. In order to increase accessibility and connectivity to this trail, the County of Warren spearheaded the effort to construct a 60-foot-long bridge about 300 feet beyond its property boundary. 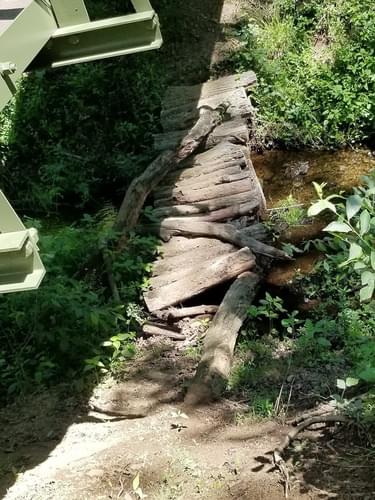 With permission and support from State Park officials, we applied for a Recreational Trails Grant, shopped around for a cost-effective bridge that could be transported, assembled, and installed in the middle of the woods about a mile away from the nearest road, and hired numerous professionals to assist with the design, permitting, and construction inspection, such as surveyors, environmental/wetlands specialists, and engineers. The County Bridge Department also lent its advice and expertise which was enormously helpful.

Meanwhile, we collaborated with volunteers from the Warren County Board of Recreation Commissioners, the Warren County Parks Foundation, the Morris Canal Committee, the Canal Society of New Jersey, the New York New Jersey Trail Conference, and the New Jersey Youth Corps in order to further clear the trail and widen most parts of it so that segments of the bridge could be transported back to the installation site. Over many years, dozens of volunteers spent thousands of hours working on this trail, not only widening it where necessary on the west side to Bilby Road, but clearing it east all the way to Waterloo Village, a historic 19-th century village located within Allamuchy Mountain State Park, completing a new 5-mile segment and what has now become the longest continuous stretch of the Morris Canal Greenway in the State of New Jersey.

The new Waterloo Valley Trail Bridge project engaged and garnered the support of public-sector officials from the county and state, as well as the overall continuation and advancement of the Recreational Trails Program. At a ribbon cutting ceremony held on National Trails Day, all three of the Warren County Commissioners spoke in favor of this project and how their constituents in the community benefit from access to such trails. Assistant Director of New Jersey State Parks, Mark Texel, also attended and spoke about the importance of recreational trails, as did the Regional Park Superintendent, Josh Osowski. While holding a National Trails Day Proclamation signed by Governor Murphy the day before, Brandee Chapman, the New Jersey State Trails Coordinator, emphasized “This project highlights the importance of the DEP’s Recreational Trails Grant Program, which has provided over $23 million dollars in financial assistance to nearly one thousand trail construction and improvement projects throughout New Jersey, like this one.” The Chairman of the New Jersey Trails Council, Bill Foelsh, also spoke about the importance of federal funding for trail projects like this one and encouraged those in attendance to contact their local leaders and congressional representatives to express their support for the recreational trails grant program.