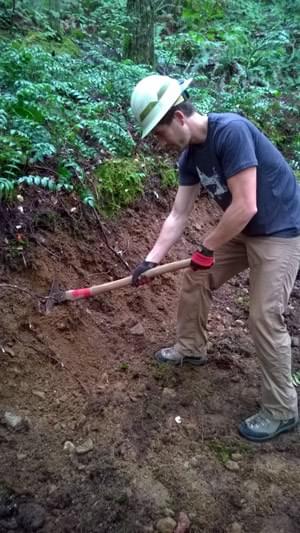 The Snoqualmie/I-90 Corridor contains the most popular recreation destinations for many of the 3.6 million residents of the Seattle Metropolitan area of Washington State.

With extremely high usage, an array of different land management agencies, diverse user groups, and proximity to a large urban population center, the task of effectively managing recreation in the area is a challenging but important one.

Sam Jarrett has that task for DNR managed lands in the corridor. Sam is an eight-year veteran of the Department of Natural Resources, the state agency managing 3 million acres of trust land and natural areas statewide with over 1,100 miles of trails. As Recreation Manager for the Snoqualmie Unit of South Puget Sound, Sam is responsible for administering public use of 56,000 acres of land and 110 miles of trails receiving more than 800,000 user visits annually.

Possibly because of the passion that many citizens feel about these cherished natural areas there has also been a history of controversy over issues of recreation, conservation, and forest management. The most visible of these has been decades of conflict between user groups, particularly hiking, mountain biking, and equestrian. As the Metro population grew by 40% (1 million new residents) in the last 25 years and the popularity of mountain biking skyrocketed, the need for trail access for all users exploded. During that time the mileage of trails open to bicycles remained unchanged and the result was overcrowding, illegal use of closed trails, rogue building of new trails, and growing user conflict.

When Sam moved to the Snoqualmie Unit from Green/Tahuya State Forest in 2008 he inherited these daunting challenges. With only 7 miles of trail used by 60,000 cyclists during a 6 month season, and a 20 year old recreation plan which recommended 16 miles of additional trails open to bicycles, he saw the need to expand trail inventory while simultaneously working to improve relations between user groups. And all this would have to be done while ensuring that recreation was compatible with the DNR obligations for trust lands and environmental protection.

To achieve this Sam launched a number of initiatives. First he restarted the Snoqualmie Unit Advisory Committee, a group that seamlessly transitioned into part of the broader Snoqualmie Corridor Recreation Plan Committee, to build bridges between recreation groups on the lands he managed. He successfully competed for and secured over $1.5 million dollars of grant funds for planning, trail construction, bridges, maintenance, and education - over $600,000 of which was in the current two year cycle alone. In 2013 he launched a twelve-person mountain bike Volunteer Forest Watch program. Now in its second season it has been effective in enhancing on-the-ground relations between users, assisting with rider education, and improving overall compliance with regulations.

During this time he also worked to bring more volunteer support to maintain existing trails. Expanding on partnerships with groups like Washington Trails Association, the Mountains to Sound Greenway, and Evergreen Mountain Bike Alliance, he brought thousands of volunteer hours to work on hiking trails in the Natural Resource Conservation Areas as well as rebuilding the Preston Railroad grade mountain bike trail to improve drainage and user experience.

While these efforts were important to improving relations and supporting existing recreation, Sam knew that an important part of the long-term solution was increasing recreation opportunities through new trails. Having established his credibility as a manager with respect for the needs and concerns of different users, he was able to build broad support for a conceptual plan of new multi-user trails with mountain biking as the primary management objective on East Tiger State Forest. That plan envisioned a final network of 21 miles of trail designed to be low maintenance and to provide the user experience that mountain bikers were looking for - creating options of different difficulty and eliminating the need for riding on logging roads.

In the past two years 8 miles of trail from the East Tiger plan have been built and opened through DNR leadership in partnership with Evergreen Mountain Bike Alliance. The first trail, opened in September of 2012, provides a challenging route off of the summit of East Tiger Mountain as well as spectacular views of Mt Rainier. In May of 2014 an additional 3 miles of trail opened and was quickly followed with another 3 miles. This has doubled the available mileage of trails for cyclists–and has done so with high quality trails that provide the type of experiences that mountain bikers are seeking. Not content with working on only one landscape at a time, Sam has also been hard at work on the Raging River State Forest, a relatively recent acquisition of DNR in the Snoqualmie corridor. With a high level management plan for hiking, biking, and equestrians already in place for the forest, his effort is now being spent on turning concepts into well-designed plans.

Sam's vision of reducing tensions and improving the recreation experience for all visitors to the DNR managed lands near Seattle is off to a tremendous start. While it will take years to complete and will require ongoing commitment from the agency and the community, his leadership, drive, and skill will be leaving an indelible mark on the landscape for decades.