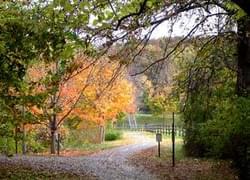 The 45-mile W&OD Trail is one of the most-used greenway trails in the country.

The 100-foot wide Washington and Old Dominion Railroad Regional Park (W&OD) is one of the skinniest parks in the Commonwealth of Virginia, but also one of the longest: 45 miles in length. The W&OD is owned and operated by the Northern Virginia Regional Park Authority (NVRPA) and it takes its name from the railroad whose trains ran along the right-of-way from 1859 until 1968.

In 1999, $40,298 in Recreational Trails Program (RTP) funds helped produce 34 unique wayside exhibits (a total of 50 with duplicates) spread out along the length of the 45-mile long W&OD Trail. The exhibits feature photos and graphics from the railroad's 110 years of operation.

This project has been instrumental in helping W&OD trail users become aware of the important role this railroad played in shaping Northern Virginia. For example, an excerpt from the exhibit at the Glen Carlyn Station states:

"If you arrived here by train on a summer Sunday afternoon in the 1870's, you would find crowds of people enjoying Arlington's premier amusement park. The Carlin family, who had owned the property since 1766, developed the amusement park here in 1872, and it boasted a large swimming pool, a bar, dance pavilions, and a 250-seat restaurant and ice-cream parlor."

The heyday of the W&OD came early in the 20th Century, when it provided service three times daily from Alexandria to Falls Church, Leesburg and Purcellville, with stops at such hamlets as Dunn Loring, Hunter Station and Paeonian Springs. In 1987, the W&OD was designated a National Recreation Trail by the U.S. Department of the Interior. 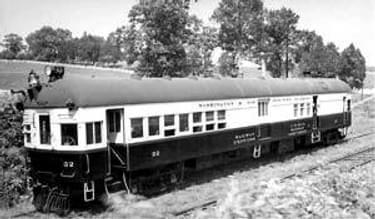