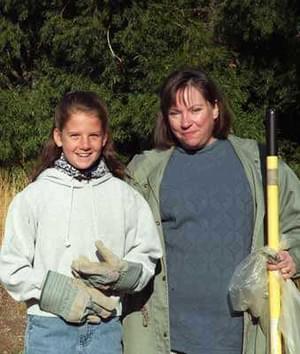 Not only has Lynne Olson’s name been on every one of Parleys Rails Trails and Tunnels (PRATT) Coalition’s Corporate documents, but her fingerprints are on every major milestone and stroke of PRATT’s good “luck.”

She is a founding member of PRATT, and has been its secretary until resigning from that position in March of last year.

Lynne has for many years articulated to our community and legislators the vision of a trail through some of the most heavily developed land in the two cities it will traverse, connecting the Bonneville Shoreline along our mountains’ edge to the Provo Jordan River Parkway to our west. Lynne organized the “KOPE Kids,” (Kids Organized to Protect the Environment) in 1989 to help persuade Salt Lake City to purchase a neglected parcel of undeveloped land along Parley’s Creek, in the center of a 10 acre commercial block – and then worked with the City on an agreement to have Utah Open Lands maintain a conservation easement in perpetuity on that property, now called Hidden Hollow. Now that construction is underway on a second major segment of Parleys Trail yet another park along its route has been established only last week; the sixth in a growing series of parks to be connected by Parley’s Trail.

Lynne Olson repeated her success with the KOPE Kids by enlisting them in the design for the Trail’s crossing of 13th East, a major arterial street carrying over 80,000 vehicles per day. That effort culminated in a commission by PRATT for the design of “The Draw at Sugar House,” by environment artist Patricia Johanson in 2003. Most recently her ability to determine which non profit organization will be at the center of influence for the next phase of trail development led Lynne to step up her involvement in the Sugar House Community Council.

She has used her position as Director of that influential but unruly organization (and Chair of its Parks, Open Space and Trails Committee) these past two years to educate the community and garner neighborhood support along the length of the trail through Sugar House – Salt Lake City’s largest residential / commercial community outside of its downtown. She has created new advocates for the trail even along segments where only recently residents thought a trail would increase crime and decrease property values. As large parcels surrounding Hidden Hollow and abutting the Parleys Trail corridor have come up for redevelopment, Lynne has worked to influence the design of both to incorporate the trail as a major amenity.

She has influenced the outcome of the second property by alerting PRATT, Utah Open Lands, Sugar House Community Council and others of the opportunity to comment on the Request for Proposals for the development of this Salt Lake City Redevelopment Agency land so that the winning proposal was the one that best addressed the community’s desires for a trail through the property.

As a member of the Sugar House Summit Steering Committee Lynne Olson was able to convey the importance of non-motorized access to businesses and recreation over the course of seven bi-monthly public sessions held from August 2009 through June 2010. This spring Lynne Olson developed even more avenues to increase community awareness and support for the planned Parley’s Trail trail in the Sugar House Business District and its use when completed. In her typical win-win-win approach she began to identify ways in which the Business District can draw more visitors without concern about parking limitations, which is a long-standing complaint of would-be shoppers. Again in her capacity as Director for the Sugar House Community Council and carrying out the communities wishes as defined during the Sugar House Summit sessions she has helped establish a series of Business District Gallery Strolls, an Independence Day Street Fair, and a weekly Sugar House Farmer’s Market.

She is also leading an effort to identify, map, and install signage for all public accessways through and within the Sugar House Business District, many of which are narrow foot trails for school access established nearly a hundred years ago or public easements required of developers for pedestrians to reach other business properties or parks, again in the spirit of win-win to ensure success of Parley’s Trail and the businesses accessible from it.