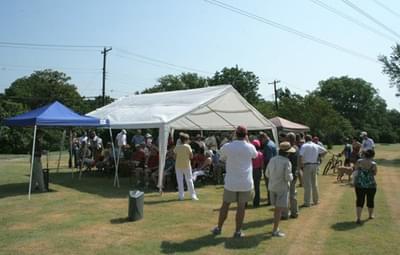 The Friends of the Northaven Trail, Inc. (“FoNHT”) was formed as a community-sponsored Friends Group in a collaborative partnership with Dallas neighborhoods, the City of Dallas (the “City”), and Dallas County for the purpose to develop and maintain a multi-use hike and bike trail.

The NHT is a linear trail planned to stretch more than 10 miles across North Dallas, connecting on the east to public transportation (DART-Dallas Area Rapid Transportation) and two other trails that head north and south through Dallas. The west side of the trail will also connect to a DART station. The initial phase of the Trail is 2.5 miles long. Initially Phase 2 & 3 was placed on hold as the City did not want to add dollars to the bond package for Parks and Recreational use. However, with the Boards work with the community at large, our public city and county officials, and the overwhelming positive feedback the Trail has received additional dollars committed to the bond package for the Park and Recreations, for continued completion of the 2nd phase of Trail. The bond package was voted “Yes” by the voters of Dallas in November 2012.

The Board’s plans to be a voice to the City and County with input on the completion of the Trail’s final 7.5 miles. As the remaining portions of the Trail are ultimately constructed, the Trail will pass through neighborhoods which encompass different ethnic groups, cultural backgrounds, and languages. The Board serves the public land site by being proactive with input and feedback to the Trail’s planning architects, the City’s Parks Department, and other governmental entities involved in planning and funding certain linkages to the City’s Trail System. 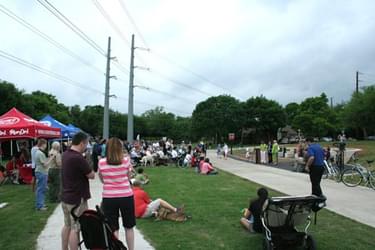 FoNHT has been involved in the design process: including plan review, alignment considerations, development of an amenities package, landscape design, traffic pattern and traffic control considerations. FoNHT representatives have also been recently active in a collaborative effort with the City and other Friends Groups to develop a Trail Safety Initiative Program. A FoNHT board member chairs this initiative.

FoNHT see their role as integral in the education and development of our neighborhoods such that future generations will lead healthier lifestyles. Their efforts will help create and sustain community partnerships, create new and safe alternate transportation avenues, and promote the Trail’s use as a recreation and exercise venue built around the concept of promoting a sustainable environment.

The Board has sponsored events with activities ranging from fundraising, movie nights on the Trail, “Clean Up the Trail” program, and community service to community grassroots meetings. In an ongoing marketing effort, they attend neighborhood meetings to announce the Trail and address questions and concerns from the community. The Board takes part in local affairs and sponsor booths at area fun runs, bike tours, and community events.

They send out monthly emails and use our website as a voice to maintain active dialogue with volunteer and support lists. They have grown our volunteers and members to over 265 individuals and organizations, have risen over $175,000 for maintenance, and are focused on continued volunteer and member development, as well as the Trail’s future integration into the community.

FoNHT have, and will want to continue sponsorship of events, such as “Clean up the Trail” which are aimed to promote awareness of the Trail, recruit new members, raise funds, and maintain the land site so it can be safely and appropriately used. This event and those to follow create a sense of ownership for the neighbors and users of the site, as well as a sense of community involvement which will engender a long term commitment to the NHT plan and the site’s usage.