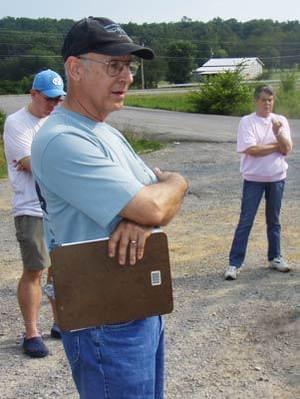 Ken Jones is a remarkable individual who has dedicated his retirement years to improving the trail system in the southeast Tennessee area.

Prior to his retirement, he was an engineer with TVA’s Watts Bar and Sequoyah Nuclear Power Plants. He took early retirement when it was offered to him about 10 years ago and immediately started working on regional trails

He became first involved with the Benton MacKaye Trail Association. At that time the BMT stopped at the Ocoee River, thus running only about a third of its current distance from Springer Mountain to Davenport Gap at the north end of the Smoky Mountains. He was asked to head up a project to get the trail on the ground between the Ocoee River and the Little Tennessee River, a distance of about 100 miles. He worked with the Cherokee and the Nantahala National Forests to map out a corridor using as much as possible existing trails and abandoned logging roads and obtaining NEPA approval for new trail corridors on a fast track. He then pulled together a crew of many dedicated volunteer trail builders to actually build the trail. Within less than 5 years, the 100 miles of trail was open and hikeable. The dedication ceremony of this section was held in 2005 at Mud Gap along the Cherohala Skyway. These trail builders were out on the trails with pick and axe, chain saw and crosscut saw several days a week for about 3 years.

Following completion of the TN/NC section of the BMT, he then began working with the Tellico Ranger District of the Cherokee National Forest to open up the long neglected hiking and horse trails in the district. He essentially became the Trails Tech as a volunteer for the district. He coordinated a large group of volunteers from 2005 until about a year ago to open up every trail in the ranger district. This was quite an accomplishment considering that the almost 300 miles of trails had not seen any trail maintenance for several years and much of the trail system is within designated wilderness, necessitating the use of crosscut, swingblade, and loppers. Today the trails in the Tellico Ranger District are better than they ever have been. About a year ago, the Cherokee National Forest gave permission to the Tellico Ranger District to hire a Trails Tech. Much of the organizing Ken used to do is now done by a paid professional, but Ken is still out there working on the trails at least two days a week. His energy and dedication is never ending.

Ken has proven his ability to organize seemingly hopeless overwhelming projects and see them to fruition, bringing together many volunteers including hikers, horsemen, and motorcyclists working side by side. He has an incredible working relationship with the USFS personnel which results in positive answers to most of his proposals. Many, many people have benefited from his work. Now hikers, backpackers, horsemen and motorcyclists enjoy the well-maintained trails of the Tellico Ranger District of the Cherokee National Forest and the Benton MacKaye Trail through Tennessee and North Carolina due to his relentless efforts.