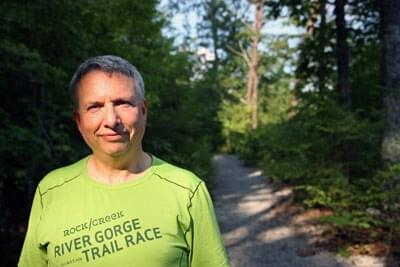 A corporate merger brought Jim Johnson to Chattanooga in 1997, but love— for the region and a community that changed his life— has kept him there.

Love and gratitude also prompted the native New Englander to make a generous gesture: thanks to Jim, the community he's called home for the last 15 years will have a new trail system on the iconic slopes of Stringer's Ridge, a large undeveloped forest within the city limits.

Like many love stories, this one includes an early hiccup. An avid cyclist, Jim's first visit to Stringer's Ridge was a nighttime mountain bike ride with the Chattanooga Bike Club. "I promptly got separated from the group, my lights went out, and I was entirely lost," he recalls. Despite the darkness and misdirection, the ride left him with an overwhelmingly positive impression. Jim was amazed that he could ride so quickly to a trailhead. "From my front door it's literally a five-minute ride to three different Stringer's Ridge trailheads— and I live less than two miles from downtown!"

In 2007, developers announced plans to place 500 condominiums on the ridge. Fearing that the plan would forever change the character of downtown Chattanooga's woodsy backdrop, the community rallied to oppose it. The following year, TPL launched a full-scale drive to save Stringer's Ridge.

Jim first became aware of TPL's efforts at a local TPL fundraiser. Then president of the Chattanooga Bicycle Club, he encouraged the club to support the fundraising drive and challenged others to match their contributions. Thanks to the hard work and support of the community and partners, 92 acres of the property became a public city park. "Stringer's Ridge is amazing," Jim says, "but the existing trails are somewhat haphazard, rundown and eroded. The urban forest has tremendous potential as a trail system for hikers, mountain bikers, trail runners and residents who just want to take a break from city life, but today very few people go there."

At first, nobody felt certain that the city would be able to create a safe, sustainable trail system on the protected land. One evening, Jim overheard a friend talking about the potential impasse and had an idea. He sent an email to TPL's local director, Rick Wood, asking if he could contribute $50,000 toward construction of a trail system. "It took about five seconds from the time I hit 'Send' for Rick to respond with 'Let's talk!'" Jim stressed to Rick that he wanted to pay for actual construction-not consultants. "I wanted to know that my donation paid for the dirt under my feet. When I see friends running, walking, or biking up there, I can think to myself, 'I paid for that.'"

Armed with Jim's donation, Rick approached the Lyndhurst Foundation, a longtime TPL supporter, for help. The foundation agreed to fund trail planning and design. Jim saw the value of his contribution immediately triple. As planning moves forward, Jim is staying as involved as possible. However, he says, "I want this to be a vision of what the community wants, not what I want. I'm not buying a say in the process. But once the design is complete, I'll be up there with the first team of volunteers."

"The town has really given me a lot," Jim says. "It changed my life. I came here in my mid 40s and I'm now 57." Jim is reflective as he describes what unfolded for him after the move. His job at a Fortune 500 company came to an abrupt end, and he suddenly found himself with no income.

During vacations, as a freelance travel writer, he'd written articles focusing on Europe, doing most of his research by bike. So Jim founded a company that represents overseas bicycle tour companies-one that has grown to nearly 2,000 clients a year. "Travel, writing, bicycling-over a period of time I was able to integrate my passions into a livelihood," Jim says. What was once a hobby blossomed into a business that allowed him to give back to the community that had sustained him during the transition. "My company provides a comfortable income, but I'm not wealthy," Jim explains. "It wasn't as simple as just reaching for my checkbook." But the window of opportunity was very small. "If the land had been turned over to the city without plans in place, the trail system may never have been possible."

Today, Jim drives a '92 Toyota and is deferring a new car-and probably retirement-to make his gift possible. He modestly balks at the word "legacy" but acknowledges that making a meaningful contribution for his friends and community was on his mind when he made his donation. "When you're looking 60 in the eye, you start thinking about this."

For now, however, there is plenty of biking, travel, and community to keep his life full and busy, and Jim looks forward to enjoying the new trail with friends. "Chattanooga's been good to me," Jim says. In return, he's leaving a safe, well-built trail system that will help others find their way on a protected ridgetop in Tennessee.