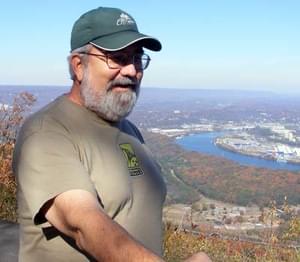 Bob has been a strong supporter of all the different types of trails in Tennessee both non-motorized and motorized trails.

The Council meets quarterly and recently won the 2010 Coalition for Recreational Trails Award for Outstanding State Recreational Trails Advisory Committee. Bob has been a strong supporter of all the different types of trails in Tennessee both non-motorized and motorized trails. As the State of Tennessee's Greenways and Trails Program Coordinator, Bob has provided the Council with staff assistance and has helped keep the council up to date as to what is happening in Tennessee. Bob also actively participates in the TDEC Governor's Environmental Stewardship Awards program encouraging communities to submit applications for the Greenways and Trails category, but also acts as a judge for the program.

Bob also wrote and had funded a 2009 TN Department of Transportation Transportation Enhancements grant for $80,000 for the signage of the Trail of Tears National Historic Trail Auto Tour Route signage grant. Bob is the principal point of contact for the National Park Service MOU with the State for the Trail, and works with National Trails of Tears Association and its Tennessee Chapter. He was on the Committee developing the 2009 Greenways and Trails forum held here in my hometown of Johnson City and this event featured the many trails in the upper East Tennessee area. Bob teamed up with Mr. Paul Carson, Superintendent of the Overmountain Victory National Historic Trail and co lead the off site OVNHT tour and the educational session for the National Trails System with Mr. Carson.

Bob loves to speak with groups about trails and his speaking engagements in 2009-2010 have included the TN Chapter of the American Planning Association, the TN Recreation and Parks Association, and he was the keynote speaker for the annual Benton MacKaye Trail Association conference. He also has spoken at the Middle Tennessee Dirt Riders Association and the Mountain Trail Riders Association monthly meetings and encouraged these groups to work cooperatively with possible public partners in their respective areas of the state. He also produces and distributes the Tennessee Greenways and Trails TIDBITS enewsletter which is sent out on a monthly basis.

Bob not only talks the talk, but he walks the walk. He is a volunteer supervisor on the Nashville Beaman Park Accessible Trail project which received an RTP grant in 2009 for the development of these trails. Bob has volunteered his own time of over 150 hours and has supervised multiple volunteer trail crews building session creating a 6 foot wide by 350 foot long wood boardwalk. This boardwalk will terminate at a BIG red oak tree and a deck will be built up to the tree so people with disabilities can touch and/or give the tree a hug.