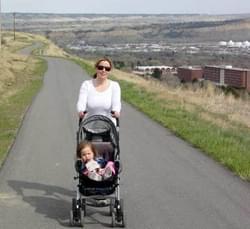 The accessible trail is used by a wide range of visitors

The environment has been refurbished and the land has been re-contoured, as it had previously been misused.

The ten-foot-wide, hard-surface, multi-use, ADA-accessible pathway runs through the entire length of the City-owned park that is located along the top of the Rimrocks, a geologic formation. The trail is approximately 4.5 miles in length and serves user groups of all ages including bikers, walkers, joggers, skaters, strollers, the physically challenged, and individuals riding in wheelchairs or using adaptive bikes.

The Swords Park Trail provides a link to the bike/pedestrian underpasses that have been placed under 27th Street, Airport Road and Alkali Creek Road as part of a recent reconstruction project servicing Airport Road.

With this trail and the underpasses in place, it links to the trails in the Heights along Aronson Road, and Alkali Creek Road and, with one more trail link, will provide a connection to the Main Street Underpass and the trails through Earl Guss Park up to subdivisions in the Heights and down to the Yellowstone River, thus connecting the riverfront to the Rims, which are two beautiful natural resources in the Billings community. 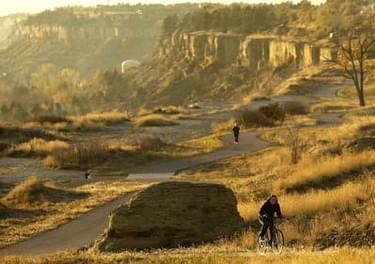 The trail runs along the top of the Rimrocks above Billings

The Swords Park Trail has included interpretive signage to enhance the trail user’s experience and provide educational and historical information along the route. Through the construction of the trail, the environment has been refurbished and the land has been re-contoured, as it had previously been misused. Now with increased usage of the trail, more people are the “eyes and ears” to help protect the area. New life has come to the park as the wildflowers and other vegetation have been restored, which also protects the wildlife.