This award honors efforts to engage children and youth in outdoor experiences using trails. Creative interpretive, educational, and/or recreational design components are included along with innovative programs which stimulate children's imagination and promote their interest in and appreciation for the natural environment while developing healthy lifestyles. 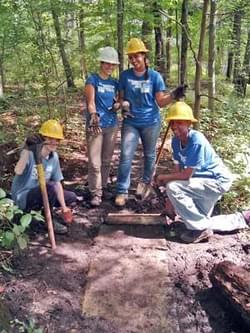 During the summer of 2009, the Student Conservation Association (SCA) brought kids and trails together on 103 crews in 18 cities and major metropolitan areas across the nations.

These SCA crews (with a total of 1,272 high school age members) restored 329,392 feet of trail at 185 project sites in city and county parks. An additional 57,641 feet of new trail was created by these kids.

These trail restoration efforts took place in: Baltimore, Boston, Chicago, Dallas, Detroit, Houston, Jacksonville, Milwaukee, Newark/Clinton (NJ), Philadelphia, Pittsburgh, San Francisco Bay Area, Seattle, Stamford/ Bridgeport/Greenwich (CT), and Washington DC. An aggregate total population in these areas well in excess of 16 million have the potential of benefiting from these improvements to their urban green spaces and ultimately to their quality of life

SCA, a national nonprofit, was founded 53 years ago on the belief that young people were ready, willing and able to take on a significant role in conserving the nation’s natural resources, and in doing so, something significant and long-lasting will develop. That very same premise, first practiced in national parks, applies equally to those living and serving in their local urban communities. First established more than three decades ago, SCA’s urban community-based programs have experienced significant growth recently. In 2006, SCA fielded 326 high school students in 6 communities; this number has grown to approximately 1,400 participants in urban areas nationwide this year.

SCA’s community programs are designed to engage diverse, urban high school students who are potentially at-risk (ages 15-19) in hands-on conservation service opportunities that deliver: life and career skills that will lead to success in the world of work; a service-learning model that emphasizes engagement, preparation, hands-on service, reflection, evaluation and celebration within the community; a stipend specifically geared to remove financial barriers to participation; meaningful mentoring and support to students during and after their participation; educational enrichment by providing hands-on learning opportunities through field work and through deliberate environmental education, such as field trips, workshops, and career fairs; and training that provides team building and leadership activities, tool safety/maintenance, and basic trail building skills.

While SCA community crew members gain much through their SCA experience, what they give back is just as valuable. The urban high school students who participate in SCA programs provide hands-on service on urban green spaces, completing meaningful environmental work projects such as trail building and restoration, invasive plant removal, revegetation and construction. 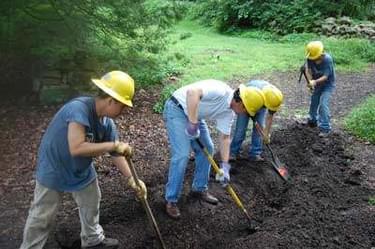 Examples of the trail restoration work completed during the summer of 2009 include:

Nearly six miles of trail and corridors were restored or maintained at Wissahickon Park, John Heinz National Wildlife Refuge, Valley Forge National Historical Park, and on the Cynwyd Heritage Trail. Restoring trails at these public spaces provides improved recreational venues for the Philadelphia metropolitan area’s millions of residents and tourists. Valley Forge National Historical Park alone reports more than 1.4 million annual visitations. The largest single construction project completed by the crews was the removal and replacement of 30 feet of fencing along the Cynwyd Trail. One of the crew members declared: “It was a fun summer! It felt good completing our last fence project. We worked so hard on it and it looked great when it was all done!!” 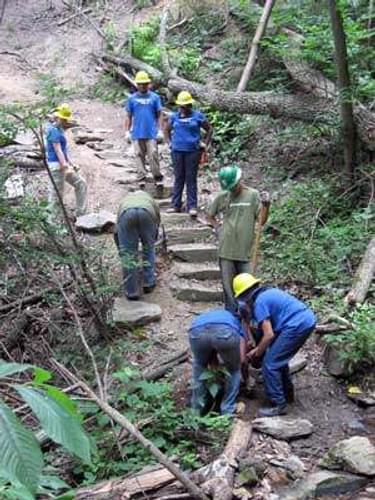 A nine-member SCA team created a dirt trail out of a forested area behind the Discovery Museum in Bridgeport, CT’s Veterans Park. They cleared a path nearly a mile long by digging out weeds, cutting down diseased trees and dislodging rocks (sometimes the size of boulders) – all by using only hand tools. The Discovery Museum, with over 100,000 visitors annually, has designed the trail to be a small-scale model of the solar system. Signs along the trail represent the planets in the solar system and contain information about each planet and how it compares to Earth. The trail has been blazed by the SCA team to be as universally accessible as possible, so that Bridgeport residents can easily walk through portions of Veterans Park, while learning about their natural habitat.

Bridgeport Mayor Bill Finch visited the crew and told them that “there’s so much work to do here. We need better trails that are safe and reduce erosion. We need to remove old asphalt and fencing.” He told the crew members that the conservation skills and environmental education training they have received during their service “puts you on a career ladder.” “You’re getting trained and exposed to potential careers,” said Mayor Finch, noting the need for his city to create green-related jobs, by which he meant those jobs related to improving the environment. Vanity Dennis, 18 and a resident of Bridgeport, called the SCA program quite a learning experience. Among the conservation, outdoor and job-readiness skills she acquired over the summer, she was intrigued to learn how to de-bark trees using a unique, specialized tool. This lesson was not something to which a city dweller would normally experience. “As an inner-city resident it was a challenge, but I like doing things outside the box and was able to meet many new people,” said Vanity, who is currently attending Housatonic Community College.

SCA’s presence in Dallas’s Trinity Forest is part of an effort in collaboration with the Trinity River Corridor Project to protect the urban forest as an effective, natural pollution buffer and a viable natural habitat for both endangered and non-endangered species. SCA Dallas crews worked to ensure the most efficient and effective use of the Trinity Forest trail system to support this effort. The crews cleared leaves, limbs, and other debris from the trails; pruned and removed trees and limbs that inhibit easy trail navigation; repaired physical damage to the trail and immediate surrounding land; eliminated social trials to prevent erosion; building of trails and rock walls will help mitigate the re-absorption of pollutants into the water supply by curbing excess run-off; and removed invasive plant species that threatens the continuity and integrity of the natural habitat.

Philip Erwin, an ISA certified arborist who works with the Trinity River Corridor Project, reports on his experience with SCA: “The organization arrived in Dallas a few years ago and the young folk who have come on board to do something spectacular with their summers have been blessed. I have to admit that I knew very little about SCA, and I knew even less of the local community program they had put in place. That was my loss. I was not only truly inspired by the scope of the work accomplished by these young adults in their short month of team bonding, but I was amazed at the organization and leadership skills that were exercised in the process. This is truly a successful national program that has found a home here in North Texas.”