Christine Ellis works to mobilize citizens to protect the river and its traditional beneficial uses.

One of her strongest passions is not only the protection of the river itself, but promoting the river as a 140-mile “Blue Trail”, stretching from Lake Waccamaw, NC to Winyah Bay, SC. It is from her outspoken love for the river, that it has been recognized by the Department of the Interior as a priority America’s Great Outdoors (AGO) project. The project has also been selected as an AGO National River Initiative and National Blueways pilot project. Christine is an exceptional volunteer and has been the key to establishing an active committee of residents and agency staff interested in developing a Blue Trail along the 40 mile portion of the Waccamaw River as it flows through North Carolina. The committee, or partnership, includes representatives from NC State Parks, NC Wildlife Resource Commission, Brunswick/Columbus County Parks and Recreation, The Nature Conservancy, Cape Fear Council of Governments, and other interested citizens. 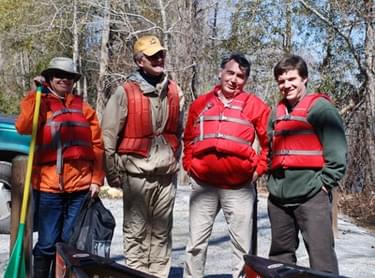 She has facilitated numerous public meetings, organized paddle events and outings with state officials and serves as the point of contact for developing the Blue Trail in the State of NC. Without her, the current leadership and public involvement regarding the Blue Trail would not have moved as quickly as it has.

In the state of South Carolina, the Blue Trail continues for an additional 100 miles. That portion is mostly funded and promoted through a partnership between the Winyah Rivers Foundation (Waccamaw RiverKEEPER), the Pee Dee Land Trust and American Rivers. Christine has been the catalyst and driver in keeping the Blue Trail at the forefront of elected officials and interested citizens. Also working through Coastal Carolina University's Burroughs and Chapin Center for Marine and Wetland studies, Christine has lead several group studies focusing on the monitoring of water quality both within the watershed and along the Waccamaw River. Christine's love for the river is evident in her passion to continually educate residents on the recreation and conservation opportunities the river offers. Her goal is to develop a Blue Trail along the entire length on the river (140 miles) as it flows from Lake Waccamaw (NC) to Winyah Bay (SC).