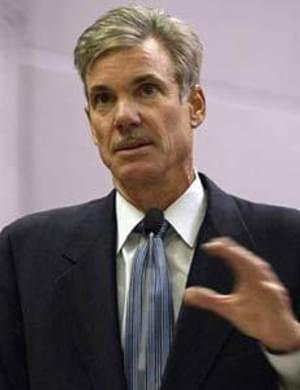 Senator Torlakson represents California’s 7th Senate District which includes most of Contra Costa County, portions of which are within the Sacramento-San Joaquin Delta.

Tom Torlakson was born in San Francisco, California and earned a B.A. in History in 1971, a Life Secondary Teaching Credential, and an M.A. in Education in 1977 from University of California - Berkeley. He was elected to the Antioch City Council in 1978, and then served on the Contra Costa Board of Supervisors for sixteen years. He was then elected to California's 11th Assembly District in 1996 and 1998. In 2000 he was elected to the State Senate and was reelected without opposition in 2004.

For much of his life he has been an avid runner, bicyclist, and triathlete and has recognized the many benefits of exercise and recreation. Senator Torlakson is the Chair and Founder of the California Task Force on Youth and Workplace Wellness, a group seeking to raise the profile of health and fitness in the public schools and in the workplace. He recently introduced senate bill 601 which increased the physical education requirements of high school students.

Senate bill 1556, The Great Delta Trail System, was also introduced by Senator Torlakson and approved by Governor Arnold Schwarzenegger on September 30th, 2006. This bill required the establishment of continuous hiking and bicycling trails in the Sacramento-San Joaquin Delta region, as well as water and equestrian trails in parts of the region. This trail system will run throughout the five Delta counties: Contra Costa, Solano, Yolo, Sacramento and San Joaquin and will connect the San Francisco Bay Trail to the Sacramento River Trails.

Senator Torlakson lives in Antioch and often commutes through the Delta on his way to Sacramento. He recognized all of the potential that the region has in regards to recreational opportunities. "I run it; I bike it; I swim it," he said. "It's a recreation paradise." However, he recognized that there were unmet recreational needs throughout much of the Delta, and that the region could benefit in numerous ways from trail development. The trail could have significant public health benefits such as the reduction of childhood obesity. The trail could also increase outsider awareness of all of the valuable resources that the Delta provides, thus leading to more Californian’s supporting efforts to preserve and restore the Delta. Additionally, numerous economic benefits could result from an increase in visitors to the region.

Until the bill was signed by Governor Schwarzenegger on September 30th, 2006, Senator Torlakson and his staff worked long and hard to gain support for the trail amongst local communities. The Senator’s commitment to the project included personal involvement in bringing supporters together. Though he initially introduced the bill in February of 2006, much of the work that was done to gain community support which led up to it being signed by the Governor was done in summer of 2006. Exhibit two has a list of nearly thirty supporters which includes representation from Delta cities, park and recreation districts, bicycle coalitions, wildlife groups and more. As a result of the support network he formed for the project many organizations provided letters of support which have been used in grant applications. A number of partnerships have also been developed as a result of these efforts which are also listed on exhibit two.

The Delta Protection Commission has been mandated with the planning and design process for the Great Delta Trail. A handful of grants have been applied for recently in order to fund trail planning and as the planning is still in the initial stages, a completed plan is at least two years away. In keeping with the Senator’s intent, the people that live, work and play in the Delta will drive the process and identify opportunities for links. Citizen participation will play a significant role in planning for the trail and a stakeholder advisory committee will be formed with representation from a broad array of interest groups affected by the trail. At the end of the day, the five Delta counties and twelve Delta cities will be provided the opportunity to adopt and implement the trail which will bring together jurisdictions divided by county lines into potential coordination as "Delta trail stewards."

In summary, Senator Torlakson’s efforts will result in developing and/or linking almost 1,000 miles of continuous trails, one of the most extensive networks of trails in California. This project will have numerous public benefits for citizens throughout the region. His personal involvement and commitment has brought together numerous supporters for the project, and his actions are ensuring that local communities and interest groups have an active voice in the development of the trail. Senator Torlakson has shown strong leadership and made legislative efforts to ensure that his vision becomes a reality and therefore is an outstanding candidate for the Trails Public Service Award.