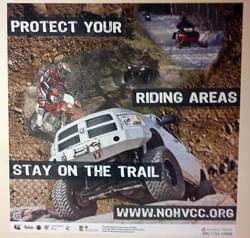 The School Messaging Project is a multi-level partnership to put positive messages about OHV recreation into schools.

The School Messaging Project is a multi-level partnership led by the Coalition of Recreational Trail Users (CRTU). When the National Off-Highway Vehicle Conservation Council (NOHVCC) was developing a new program to put positive messages about off-highway vehicle (OHV) recreation into schools, CRTU volunteered to do a pilot project for NOHVCC.

CRTU was awarded an RTP Educational Grant of $11,500 by the Minnesota Department of Natural Resources and advertised the project to local clubs. Five local clubs — three ATV clubs, one off-highway motorcycle (OHM) club, and one ATV/OHM club — provided funding for the project as well, contributing $2,300. 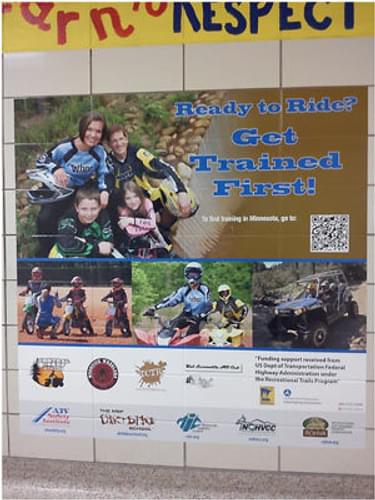 NOHVCC also re-worked their existing Adventure Trail 12 poster series to become four separate posters for schools: three posters of four messages each, plus one poster of all 12 messages. These posters are 5’ x 5’ and can be put on any surface of the school including lockers, floors, walls, gymnasiums, etc.

CRTU used the NOHVCC posters and worked with School Media to get the posters into schools in Minnesota. The posters went into five school districts and a total of 23 schools. Twelve elementary schools had one of the four Adventure Trail posters; six middle schools had the training poster; and five high schools had the “stay on trails” poster.

The posters were in the schools for the month of May through the end of the school year in June 2012. In all, over 20,500 kids had the opportunity to view the posters daily.

The administration and teachers were happy with the posters because they promoted safe and responsible OHV use, and the kids liked the posters because the images were cool and they could relate to the messages. The pilot project was so successful that NOHVCC expanded their offering of poster content to now have four Adventure Trail posters, three Training posters, and 10 Responsible Riding posters.