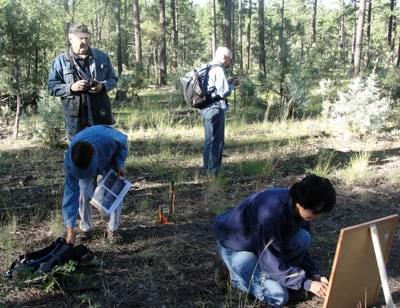 Jim kneels to focus in a shot in the exact location as previous photograph. Lyn verifies GPS location while Jerri and Sherrill study old photos to determine location for next camera shot.

In 1987 a White Mountain, Arizona, horsemen’s association of 25 members organized a volunteer group, TRACKS, to build and maintain trails for horseback riding.

Now more than 400 members strong, TRACKS has broadened its focus to meet the needs and interests of a diverse membership, as well as the community at large. Forest Service Tree Growth Study: From June 2011 to 2012, the US Forest Service relied on TRACKS volunteer assistance to monitor growth patterns in the Apache-Sitgraves National Forest. The USFS provided maps, GPS coordinates and 10-year-old photographs of various forest locations. TRACKS crews took photographs of the exact locations to document changes. Collecting information for the study involved skill and attention to detail. It was critical that TRACKS teams located and recorded the exact same spots, recorded the data, and submitted the information in a timely manner. The TRACKS team completed the project in July 2012 and anticipates assisting the USFS in another long-term study to determine forest growth, calculating tree height and diameter.

Signs, diamonds, gates, and tools purchase: TRACKS member donations covered expenses for signs, gates and major tool purchases. This, is in addition to weekly trail building and maintenance for White Mountain Trails System that TRACKS undertook in the early 1990s. Such dedication and consistent attention has resulted in more than 200 miles of well-kept trails provided for the White Mountain community.

Chainsaw Certification Classes: Since the 20001 Rodeo-Chedisky Fire, the accumulation of dead and falling trees obstructing trails has far exceeded the forest services’ control ability. To assist USFS in removing dead trees from trails, five TRACKS members took a 20-hour chainsaw course to become ‘A Level Fallers’ in June 2012. In the last three months, TRACKS’ chainsaw crew cleared portions of two trails that had been impassible since the fire and continues to clear downed trees on other trails.

Annual Mountain Bike Race: For two decades the Tour de White Mountains has drawn participants to compete in a vigorous high altitude mountain bike race while assisting a regional medical center to purchase equipment. TRACKS ensures the 60+ miles of race trails are in prime condition, flagged prior to the race and deflagged after the race. TRACKS members provide refreshments to riders at aid stations and direct and aid riders throughout the race. In 2010 and 2011 TRACKS coordinated all 70+ volunteers for the race and provided assistance to more than 600 riders.

Save Our Park: On National Trails Day 2011 and 2012, TRACKS members assisted in the “Save Our Park” campaign, an initiative to raise funds to purchase Woodland Park, which features TRACKS-maintained hiking trails in the center of Pinetop-Lakeside. TRACKS members organized and facilitated activities, led hikes, set up displays, cooked hot dogs and hamburgers and sold tickets.

Boy Scout Instruction: Over the last two years, TRACKS volunteers taught Boy Scout troops from the Phoenix region of Arizona how to build trails. TRACKS members demonstrated the proper use of tools and then worked alongside four different scout troops in building a section of trail.

City Trail Design & Construction: In autumn 2011, TRACKS was an integral workforce in developing a community trail for the City of Show Low. Through an agreement between the City, a developer and a rancher, a community trail was planned and built in a premier city location. The site includes a scenic bluff-top view; goes down a rocky, forested embankment; ending in a peaceful meadow with a stream and horses. TRACKS Trail Design Specialists assessed the terrain and drew plans for the route. TRACKS’ trail crew built the trail. Because of the design and location and the construction, it has become a major attraction for families and individuals of all capabilities. There are few trails proximal to Show Low, and TRACKS played a major role in bringing this asset to the community.

White Mountain Nature Center Assistance: In 2010 and 2011 WMNC expanded its site, adding trails and ecosystem information signs. TRACKS built the trails and helped place the signs. Before National Trails Day 2011, TRACKS readied the trails by widening and leveling them for aggregate application.