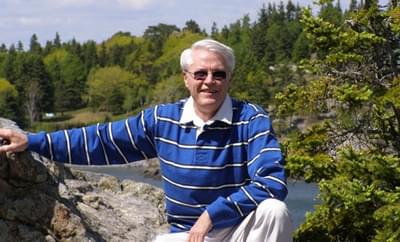 Steve Pohowsky has a variety of interests and came to trails through a circuitous route.

Originally from Scranton Pennsylvania, he joined the Air Force as an Air Traffic Controller, obtained his pilot’s license, and received the Air Force Commendation Medal. He is a graduate of Penn State University Dunmore Campus with an Associate Degree in Electrical Engineering Technology, and received a Bachelor of Science Degree from the University of the State of New York (now know as Excelsior College).

After a short stint with the Federal Aviation Administration, Steve worked for 21 years at Western Electric, AT&T, Lucent Technologies, and Agere Systems on Union Blvd in Allentown, PA as a semi-conductor engineer. He specialized in failure mode analysis and data analysis and retrieval. Steve was laid off in 2002 when Agere Systems exited semi-conductor manufacturing in the United States.

Steve joined PennDOT in March of 2003 as a Project Manager Assistant, transferring to a Traffic Control Technician position in 2004. In 2006 he was promoted to his current position as the District 5-0 Safety Program Specialist & Bicycle/Pedestrian Coordinator. The Coordinator position is typically a thankless assignment, but for trail builders in Pennsylvania it is a critical entry point when trying to work with PennDOT for trail funding, planning, design, and approvals.

Upon joining PennDOT, Steve found that educating the bicycle and trail community was a key need. He recognized what most trail builders do not understand - that is that they must follow the state and federal procedures and policies - if their project is to move forward. The lack of this knowledge stalls these trail projects. He started working on two issues: how to work with PennDOT to obtain their approvals, and how to improved trail user safety at state highway crossings. 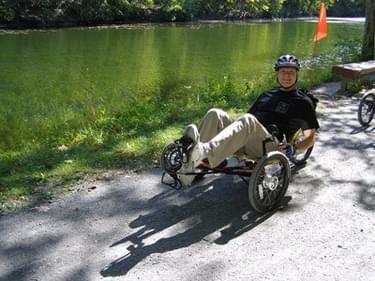 As the District Bicycle/Pedestrian Coordinator he has worked to address pedestrian and bicycle safety requests and concerns such as mid-block crosswalks, bicycles on freeways, and signage for the BicyclePA Route system. He also is responsible for all Shared Use Path Trail Crossing Agreements and trail crossing design reviews and has worked on the Saucon Rail Trail, Union Canal Trail, Schuylkill River Trail, D&L Trail, Palmer Township Trail, and several others. In October 2011, he conducted a presentation at the PA Greenways and Trails Summit in York, PA. His topic was trail crossing agreements and good trail crossing design. In March 2012 he conducted a short trail crossing presentation at the Lehigh Valley Trail Summit meeting in Bethlehem. In short, his work is saving lives.

Being an avid trail user, he has ridden his bicycle, or recumbent tricycle that looks like a lawn chair on wheels, on every trail in District 5 and has collected video film footage. Steve uses his trail riding experience as well as his extensive knowledge of PennDOT highway safety issues to effectively evaluate all trail crossing plans to determine what works best and has developed model guidelines for District 5 that will save lives. He has worked with trail partners such as the County of Berks and the Schuylkill River Greenway Association to improve the safety and visibility of existing trail crossings. Continuing his work, Steve is scheduled to be a member of a “Working with PennDOT” panel at the Eastern PA Greenways and Trail Summit in Center Valley in September 2012.