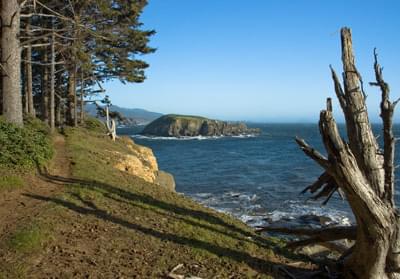 Oregon works with local, federal, and state agencies, as well as organizations, to encourage the design, construction, and maintenance of trails that offer a wide range of outdoor recreation opportunities.

Since the time of the Oregon Trail, the spirit and interest in trails has not left Oregon or Oregonians. Oregon has been a land of dreamers since people began to settle by wagon. Oregonians have dreamed of developing trails. And Oregon provides a diverse landscape to engage your trail experience. Those dreams are becoming a reality in Oregon.

In 1903, the Olmsted Brothers proposed a 40-mile Loop trail around Portland; today the Intertwine Alliance proposes a 450 mile system of trails. Dr. Sam Dickens envisioned a trail along Oregon’s scenic coastline in the 1950s; today a 384 mile trail is providing millions with access to Oregon’s beaches. As early as 1899, a bike path was being discussed to connect the communities in Jackson County; now there are two regional trails being developed to connect eight communities over 52 miles.

Oregon continues to emerge as a leader in trail planning and initiatives. Oregon was the first state to have a statewide water trails plan and the first to have state- designated scenic bikeways. Bicycling Magazine named three Oregon cities in the top 25 of best bike cities in America. IMBA has four Epic trails selected in Oregon. The state boasts 78 National Recreation Trails, three National Scenic Trails, and 16 historic trails.