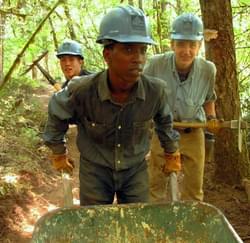 Northwest Youth Corps has been building trails to the future 1984, helping more than 18,000 diverse young people through opportunities to improve the natural environment.

NYC’s projects support the Northwest’s growing population through recreational infrastructure, which is a large economic driver in the region. In Oregon, trail related activities alone support 41,000 jobs and generate $3.1 billion in economic activity annually. The Washington State Trails Plan estimated that trail users in the state spend more than $3.4 billion per year. Idaho’s forests support 11,500 recreation jobs which support 259,000 hunters and anglers, who spend $598 million annually in the state.

Each year, almost 900 NYC participants are exposed to “green” careers, through training in trail maintenance and/or trail construction. For their successful participation, NYC graduates can earn a $1,000 - $1,800 stipend or wage per five to six week experience. Additionally, participants can earn high school credits through NYC’s accredited field curriculum, and ODS students can earn a high school diploma.

Young adults in NYC’s programs can also earn at least one industry recognized trail-related credential, such as brush-cutting and S-212 (Wildland Fire Chainsaws). Additionally, NYC’s Leadership Development Program trains individuals ages 20+ to successfully lead groups of individuals in the completion of challenging outdoor conservation projects. Up to 80% of LDP graduates successfully land a seasonal or permanent position in the outdoors, with Northwest Youth Corps or another organization or agency. Post-program surveys in 2013 showed that NYC graduates reported a 72.6% increased intention to pursue further natural resource management education or a career over a control group of non-NYC participants.

Leadership. NYC uses trail work as a vehicle to teach youth to take action, speak with confidence, and work with others to solve problems. As one 2013 graduate put it, “Northwest Youth Corps taught me much more than just how to build, fix, and maintain trails. It taught me how to be a leader, how to take initiative, and how to push myself. I now can take the things NYC gave me and apply it to my life and what I have planned for my future.” 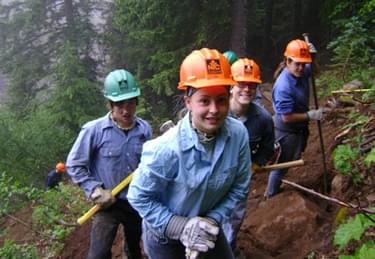 Trail work — like other natural resource management work — is tough. NYC helps youth recognize that they can achieve a difficult task while making a positive difference in their own lives and the lives of others. According to studies commissioned by the Public Lands Service Coalition in 2012 and 2013, NYC’s program improved our participants’ skills in the areas of community engagement, attitude toward public lands, environmental activism, teamwork, self-responsibility, grit, communication, and critical thinking.

NYC’s projects enhance local communities across the northwest by connecting people to their natural and cultural heritage:

Umatilla National Forest-wide Recreation Projects (Oregon/Washington). The Umatilla National Forest covers 1.4 million acres of diverse landscapes and plant communities in the Blue Mountains in NE Oregon and SE Washington. Recently, NYC crews performed a total of 12-14 weeks of tread reconstruction and brushing for the North Fork John Day Trail — a national historic trail — and the Ninemile Ridge Trail, to bring them back to standard.

Kelley Creek Trail Relocation, Mt. Baker-Snoqualmie National Forest (Washington). The once abandoned Kelley Creek Trail meets the growing recreation needs of Seattle, and was originally part of an extensive 50-mile trail system which ran through a clear-cut. In the last few years, this high priority trail has been re-routed through an old growth forest Wilderness, where only hand tools can be used. Recently, NYC crews have bucked logs up to 3 feet in diameter with a crosscut, and otherwise installed trail structures to protect fragile vegetation, wetlands and riparian areas and minimize soil erosion.

Osberg High Ridge Trail (2013) and Beaver Creek Fire Site (2014), Sawtooth National Forest (Idaho). The Osberg High Ridge Trail dated from the Civilian Conservation Corps era, and had been built at too steep of a grade, which resulted in severe erosion and reduced its usability for hikers. These issues were addressed in 2013 when crews reconstructed two miles of tread. That same summer, the Beaver Creek Fire burned 114,900 acres, after lightning struck the Sawtooth National Forest. In response, in 2014, NYC crews helped restore tread and drainage on over five miles of the former Beaver Creek Fire site, including trail re-alignment, turnpike and stream ford construction, and sign replacement.