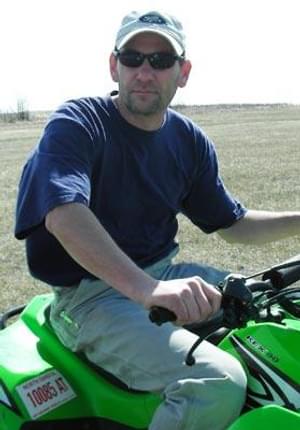 Marc Brown’s passion for trails runs deep as an avid trail trial user and the lead trail planner for the North Dakota Parks and Recreation Department. Marc’s work can be seen throughout North Dakota’s Park System in the miles of trails he’s helped plan, build and maintain.

One of the projects Marc is most is most proud of is the development of a 6.75 mile trail system at Fort Abraham Lincoln State Park called the Scouts Trail, named in recognition of the Native American Scouts who served at the old military post in the 1870’S. Prior to the development of the Scouts Trail, the parks trails grew from user developed routes without consideration for long-term sustainability. Marc’s challenge was to develop a sustainable trail hikers, bikers and horseback riders would enjoy while avoiding sensitive archeological areas found in parts of the park.

Fort Abraham Lincoln State Park is in close proximity to Bismarck, the capitol of North Dakota and one of the states largest and fastest growing cities. Prior to development of the Scouts Trail, access to quality single track trails in the area were limited. Since the trails completion in June 2008, public response has been overwhelmingly positive. One user commented the trail “was a little slice of heaven”. In June 2008 the Scouts Trail received National Recreation Trail Designation.