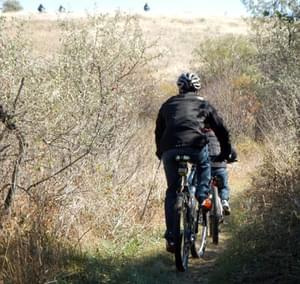 In the past four years, Mr. Wetsch has played a pivotal role in development, maintenance, and promotion of an 8.9 mile single track trail at the Harmon Lake Recreational Area (HLRA), located approximately 11 miles north of Mandan, ND. The trail, aptly named "Otter Creek Trail" after the local watershed, has become a destination trail for mountain bikers throughout the north central U.S. because of its hybrid design of "open and flowing" and ‘tight and technical’ sections, all located in a beautiful native prairie ecosystem. In addition to his leadership role at HLRA, Mr. Wetsch has served the local bicycle community through multiple volunteer efforts.

In 2009, the Morton County Water Resource District received a Recreational Trails Program Grant to develop a single track trail at HLRA. Upon receipt of the grant, a small team of local trail builders was contacted by the district to develop a trail corridor to help guide construction. Mr. Wetsch was a member of the trail building team, and in this role, provided critical input on trail design from the multiple perspectives of hiker, birder, and mountain biker. Such inclusive input proved essential in the construction of trail, and facilitated the adoption of a trail design that appealed to more than one user group.

Following the development of Otter Creek Trail, Mr. Wetsch has served as the primary contact for maintenance issues related to the trail. In this informal leadership role, Mr. Wetsch has coordinated multiple trail work days to maintain the trail in top condition. While many work days have focused on leading a small crew of volunteers to mow and trim vegetation from the trail, Mr. Wetsch’s knowledge of sustainable trail building techniques has proved essential to correct problematic sections through armoring and/or minor re-routes. Early in 2012, Mr. Wetsch led an effort to develop an agreement between the Morton County Water Resource District and a local bicycle advocacy group (Central Dakota Cyclists) to maintain the trail each summer for a modest fee. This agreement had a positive effect on volunteer recruitment, while providing much needed resources for local bicycle advocacy efforts. In addition to Mr. Wetsch’s efforts at HLRA, he has had an active role promoting trail use throughout the Bismarck/Mandan area. Since 2009, Mr. Wetsch has served as regional coordinator for "Take a Kid Mountain Biking Day," an event designed to encourage communities to ride mountain bikes with youth (Exhibit 2). The event, sponsored by the International Mountain Biking Association, has attracted regional youth to ride a short section of single track trail in Mandan, ND during the first Saturday in October.

Beginning in 2012, Mr. Wetsch partnered with the North Dakota State Parks and Recreation Department and local school districts to promote the event, resulting in a significant increase in participation, with over 30 children riding. Mr. Wetsch’s leadership on this event has not only provided area youth with a fun and healthy activity for an afternoon each fall, but has served to facilitate a greater awareness of the importance of trails to connect to the natural world.

Mr. Wetsch has made many significant contributions to promote trail use in central North Dakota. His efforts and resulting accomplishments serve as a model for effective individual and teamwork-oriented efforts to create, maintain, and promote the use of world-class single track trails.