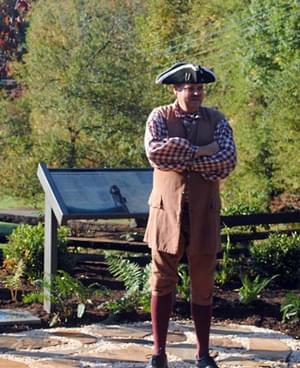 RG Absher has been a strong leader by encouraging and fostering partnerships throughout a large region of North Carolina.

At the time of his retirement in 2010, he was responsible for working with local partner Brushy Mountain Cyclists Club (IMBA affiliate) in developing over 30 miles of sustainable multi-use trails.

Absher helped create the Dark Mountain Trails, The Overmountain Victory Trail, and the Warrior Creek Trails that have been so successful that they recently received an IMBA designation of Epic Trails. Absher skillfully and tirelessly worked with local partners to plan and construct the Kerr Scott Trail system and then later worked with officials from the National Park Service to achieve designation for various portions as a part of the Overmountain Victory National Historic Trail System and designation of other portions as National Recreational Trails. These trail systems have achieved positive tourism economic impacts on the local economy by increasing opportunities for the traveling public.

From August 2010 to present, Absher has been employed by the Yadkin River Greenway Council. During this time, Absher has achieved a remarkable regional leadership role in linking up trail systems. Absher successfully applied for grant funds and built additional sections of the Yadkin River Greenway in Wilkes County North Carolina. Absher worked with officials of the National Park Service to place an additional 1.2 miles of new trail into the Overmountain Victory National Historic Trails system.

Absher is on the Board of Directors for the Yadkin Valley Heritage Corridor Partnership, which has the goal of connecting trails in a four county region along the Yadkin River Valley in North Carolina.

He has supported the efforts of the fledgling Elkin Valley Trails Association (EVTA) in developing a trail system which will link Elkin, NC to Stone Mountain State Park and provide an important trail connector to the North Carolina Mountains To Sea Trail system. Absher has assisted the EVTA with his expertise in fundraising and by sharing experience in areas such as easement acquisition and mapping. He helped the EVTA develop plans for mountain bike courses in Surry County. He has been instrumental in promoting the Surry County segment of the OverMountain Victory Trail in conjunction with the EVTA.

In the summer of 2012 Absher negotiated efforts to construct a new mile of the Overmountain Victory National Historic Trail at Lake James State Park by recruiting an IMBA approved trail crew to help local park officials construct the sustainable trail while yet staying within a tight budget.

Absher has also helped support and grow the regional efforts of Kids In Parks and Trail Tracks Programs, which seeks to encourage children to utilize the fitness benefits of trails.

He also successfully worked to get the sections of W. Kerr Scott Lake and the Yadkin River Greenway approved as a part of the North Carolina Birding Trail.

Absher is well known as a trail advocate in North Carolina. He routinely conducts and organizes ceremonies, trail cleanup events and historic field day events that attract a wider segment of the community to the trails. Absher works with the Yadkin RiverKeeper to assist in awareness campaigns for a clearer river, for awareness of the natural resources and ecology along the Yadkin River and to promote the canoe and kayak Blue Way along with adjacent greenway and trail systems.

In the late winter of 2012 Absher led a letter writing campaign to help preserve the Recreational Trails Program funding for the states. Absher’s grass roots campaign was a major factor which led US Senator Richard Burr to co-sponsor an amendment known as the Cardin/Cochran and Klocuchar Amendments to Map-21 legislation to maintain critical federal budget trail funding for the states.

Absher’s commitment to trails and work in coordinating regional, state and federal trails systems in North Carolina has resulted in major successes in developing trails and greenways. His ability to harness public support, foster partnerships and to offer support to new trail efforts and organizations is a huge asset to the furtherance of trails in North Carolina.