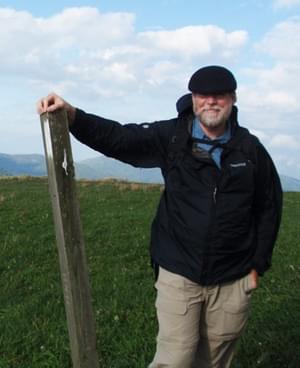 In January 2013, Morgan Sommerville will be completing his 30th year of service to the Appalachian Trail Conservancy (ATC).

Through the ever mounting political and social intrusions that threaten the Appalachian Trail (A.T.), Morgan has proved to be a stalwart protector of what appears to most as a simple footpath through the mountains. Morgan heads a staff of four, and before each staff meeting he repeats his motto, “We say yes to success!”. The motto defines his leadership style and reflects 30 years of positive outcomes, making America’s most beloved footpath the best that it can be.

After hiking the majority of the A.T. in 1977, Morgan spent the next thirty years protecting the resource so millions of others could experience the trail as it was intended. Morgan is the Southern Regional Director of the ATC, overseeing Trail management in Georgia, North Carolina and Tennessee. His dedication to the Trail over three decades has brought millions of dollars in acquisition funds to protect the beloved footpath from numerous external threats including development, mining, power line crossings and commercial use. An unfaltering partner, he has developed and maintained a premium route suited for America’s longest National Park Unit, while above all, protecting the experience treasured by the millions who set foot on the A.T.

Of equal importance is the manner in which Morgan has led these efforts. He has worked cooperatively with partners from public land agencies such as the National Park Service and the U.S. Forest Service, land trusts, State governments, Trail-maintaining clubs and the thousands of individual volunteers who look after the Trail. Whether it be working toward a partnership with equestrians in the Great Smoky Mountains National Park, or working with a diverse coalition to acquire land for the A.T., Morgan works tirelessly to ensure that all voices are heard and that resolutions are in the best interest of the Trail. He believes wholeheartedly in the grassroots effort that defines the A.T. and is peerless in his determination to put volunteers at the forefront of A.T. management. 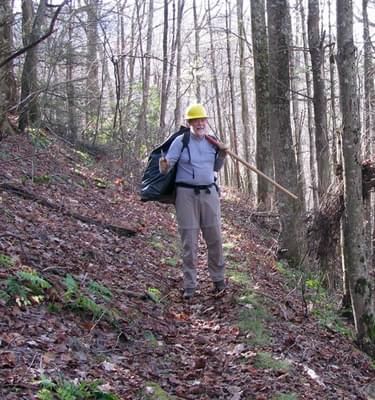 Morgan is an expert Trail designer who has laid out many of the A.T.’s most celebrated Trail sections. He has worked with the Forest Service and local volunteers to create the Optimal Location Review (OLR) for the A.T., which provides the basis for the U.S. Forest Service’s acquisition plan for the Trail. Morgan is one of the very few who has consistently ushered the OLR into its final stage of completion.

Over the years, he has designed, developed, and worked consistently to find funding for Trail Crews in the southern region, which have completed significant relocations and improvements of the A.T. He also takes time on each National Trails Day to personally lead a trail crew in Great Smoky Mountains National Park.

Morgan has never missed a year of “Hike the Hill”, a successful congressional liaison program. He provides leadership and organization for volunteers and partners who meet with multiple congressional offices and advocate for support and protection of the A.T.

As ATC’s Regional Director, he analyzed and assisted in the development of the U.S. Forest Service backcountry accessibility guidelines and worked directly with the national accessibility coordinator to make the landmark document a reality.

Morgan currently serves on the Partnership for National Trail System (PNTS) Board, and has sat on their Leadership Council for many years, supporting their goal of connecting nonprofit members, trail organizations and federal agency partners to protect, complete and steward the 30 National Scenic and Historic Trails. Since 2010, he has been involved with their strategic planning at the highest level, most recently assisting with an organizational review of the PNTS governance

It is difficult to pinpoint Morgan’s biggest accomplishment, but a struggle that has shown his tireless commitment is the acquisition of the Rocky Fork tract in Tennessee. Rocky Fork was one of the largest unprotected tracts in the southern Appalachian Mountains, covering about 10,000 acres. In cooperation with dozens of federal, local and state partners, Morgan worked for over 25 years to help acquire this high elevation tract. Vital to the Appalachian Trail, this unique natural resource also has great economic value to the surrounding community. The total cost of the property was $40 million, and the last of the funds have now been appropriated through The Land and Water Conservation Fund and the National Fish and Wildlife Foundation. On Oct 30th, 2012, partners announced that over 2000 acres in the Rocky Fork tract will become Rocky Fork State Park, Tennessee’s 55th state park.

The significance of the Rocky Fork parcel has many aspects, including the protection of rare species and water quality in over 16 miles of pristine trout streams. However, the biggest success of the partnership has been working with Unicoi County to collectively understand the full economic potential generated through the protection of Rocky Fork. Unicoi County has more than half of its land base in federal ownership, making it more of a challenge for the county to pay for public services. Morgan’s support in developing ATC’s new Appalachian Trail CommunityTM program encouraged collaboration and partnership with local leaders to recognize public lands as an asset, which bring more local visitors to Trail lands. Morgan worked with Unicoi County to get it designated as an A.T. Community, and then develop 5 action plans for the promotion and protection of Unicoi County’s recreational and cultural assets. Through this strong partnership, the community is excited about the protection of Rocky Fork and fully supportive of the new state park.