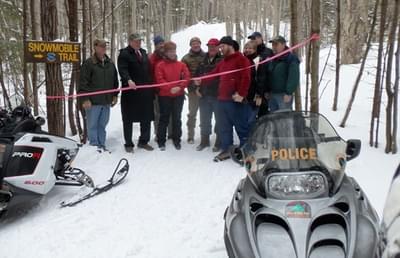 Tate Connor of The New York State Department of Environmental Conservation (NYSDEC) has consistently worked for the betterment of multi-use trails in New York State.

The new trail would be able to be used by hikers, bicyclists, cross-country skiers, snow-shoers, and snowmobilers during their respective seasons on a trail that connects the Moose River Plains to the Raquette Lake area in the central-western ADKs. OHV recreational use is not allowed for on this trail, as NYS Law regulates that use on most State-land.

Planning of this trail began several years ago, when the NYSDEC and APA suggested removing snowmobile use from the interior of the ADK Forest Preserve and more near the periphery borders, which are closer to vehicle roadways. An old “carriage road” was found by Tate and others that were charged with location a new trail there. That old road used by the likes of the Vanderbilt family back in the 1800’s would be used to lay out the trail in places along with other areas that required some small excavating equipment, OHVs, and mostly hand-work to build the trail.

While it took a partnership to make this trail viable and connecting, it was generally coordinated by Tate Connor leading other NYS DEC staffers, mostly from DEC Regions 5 and 6. Tate, who along has over 2,000 hours logged onto the planning, design, and actually building of this multi-use trail, worked with other DEC staff from Albany, the Capital of NYS, to help recruit a plethora of volunteers to help for what turned into a 2 year project that was just completed over the 2014 summer. The 12-mile long multi-use trail through the ADK Forest Preserve is named The 7th Lake Mountain Trail and is located in the Moose River Plains Unit Management Plan region.

Equipment resources from other DEC regions (including Regions 3, 4 and 5) along with equipment from the neighboring Towns of Inlet and Long Lake were utilized. A few volunteers brought UTVs as well to help haul in the necessary bridge materials and other pertinent trail-building supplies, as did snowmobile clubs from the New York State Snowmobile Association (NYSSA), namely the Inlet Barnstormers of Inlet, the Algonquin Sno-Blazers of Wells, NY and the West Rome Riders of Rome, NY. Volunteer workers from the Student Conservation Association-Adirondack Corps (SCA) spent the better part of 19 full work-crew weeks during the fall of 2012 and the summer of 2013 to help complete the project. NYSSA volunteers from snowmobile clubs also came to help build 29 bridges and haul in the resources needed to the staffers and other trained volunteers. The Towns sent some of their paid employees to help out as well. All of whom were under Tate’s direction and leadership.

The effort required to build this new trail took over 10,000 cumulative hours, both paid staff members of the different agencies along with the volunteers, to complete is a true collaborative effort. The multi-use trail is currently open as a “community connector” snowmobile trail during the winter months and all year long it’s open to the other user-groups mentioned. It is a great addition to the ADK Park in connecting communities like Inlet and Indian Lake areas to the Raquette Lake area, and ice-versa. It gives hikers, bikers, and the allowed winter users the easier ability to connect to these communities now.