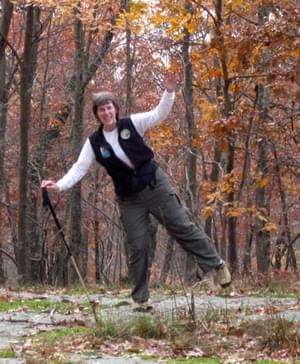 Jane Daniels, in addition to being a member and volunteer of the New York-New Jersey Trail Conference since 1979, has been involved with trails from the local to regional and state level over the past three decades.

Jane's ever-present dedication to the trails community is evident in the many positions she’s held, efforts she’s organized, trail books she’s authored or edited, and most recently her leadership in the Yorktown Community Trails project.

The New York-New Jersey Trail Conference (NYNJTC) is a nonprofit organization that has partnered with parks to create, protect, and promote a network of over 1,800 miles of public trails in the New York-New Jersey metropolitan region since 1920. Jane has played a vital role in the NYNJTC for several years. From 1989 to 2011, she served as a member of the Board of Directors, during which she advanced to Vice-Chair from 1999-2001, then was elected Chair from 2001-2007. She chaired several of their committees including the Trails Council from 2007-2011. Prior to that Jane chaired the Appalachian Trail Conservancy’s Biennial Conference from 2003-2007 organizing over 400 volunteers. The 2007 Conference ran for eight days and included hikes, excursions, workshops, and entertainment for 856 hikers.

Jane has been involved in other regional trail organizations over the years. She was the Trail Coordinator for the Greenway Conservancy for the Hudson River Valley during the early 1990s. There she interacted with all levels of government, local groups and private landowners to initiate development of the Hudson River Trail. She has continued as an active member on the Board of Directors since 1998 and as Chair of the Trail Committee since 2001.

Jane has held several leadership positions on the state (and multi-state) level. She served as a member of the Board of Managers for the Appalachian Trail Conference from 1993 to 1999 and again from 2005 to 2006. For close to a decade (1983 -1990), Jane served as Chair for the Putnam County (NY) Appalachian Trail Management Committee. Jane was also Chair of the East Hudson Trails Committee in the Taconic Region of New York State from 1991 to 2001 managing 105 miles of hiking trails with the help of 4 supervisors and 35 volunteers. Furthermore, she has been a hiking representative on the New York State Trails Council since 2009, providing critical input on a number of trail issues and is currently serving as Chair. 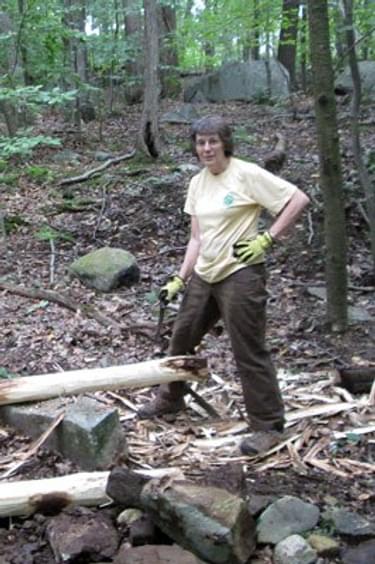 Jane at work on the trail

Jane took her experience and knowledge of trails and co-authored Walkable Westchester with her husband, Walt Daniels. The book, published in 2009 by the NYNJTC, describes the 600 miles of trails that are in 186 parks, preserves, sanctuaries, and protected open space in Westchester County, NY. Walkable Westchester, which includes photos and maps, promotes walking and describes a wide variety of walking opportunities on paved paths, woods roads, dirt roads, or narrow woodland trails in urban, suburban, rural, and natural settings. A second edition is in preparation. In addition, in the 1990s, Jane edited and managed production of the New York Walk Book and New Jersey Walk Book which are guides to 2,400 miles of hiking trails.

In February of 2010, Jane and her husband approached the Yorktown (Westchester County, NY) Parks and Recreation Commission with a request to build a 12 mile multi-use trail system in the town. The system would be comprised of existing local parks, linear connections (Yorktown Trailway and an underground pipeline), and a pending town purchase of 200 acres of open space. The Recreation Commission immediately approved development of six miles of trails to begin the project. In April, the NYNJTC approved the project. Concurrently, the project concept piqued the interest of the Westchester Mountain Bike Association (WMBA). In June 2010, NYNJTC and the Town of Yorktown signed a memorandum of understanding (authored by Jane). This agreement called for volunteers of the NYNJTC to take responsibility for maintaining existing trails and take the lead on designing and developing new trails.

Since then Jane has supervised the building and managing of now 20 miles of trails in parks in the Town of Yorktown. WMBA, which had early on secured funding for portions of the project, then became an integral partner in the project adding volunteer power and additional expertise on building multi-use trails. Jane worked with the Town of Yorktown Department of Parks and Recreation and WMBA to coordinate efforts. She developed the trail plan and the means of tracking and developing projects in addition to developing and designing material for four map/interpretive kiosks to be located at trailhead parking areas. Jane obtained almost $9,000 in grants to help fund the initiative, as well as, gained donations from local businesses and acquired pro bono professional services including cartography and environmental assessments.

Promoting community awareness has always been a crucial part of the Trails project. Jane’s efforts included having a booth at the Yorktown Street Fair, recruiting and training volunteers, and engaging various youth and camp service groups to build trails and install bog bridging. Her efforts continued as she more recently organized a town-wide parks day as part of New York State Parks and Historic Sites’ "I Love My Park Day" celebrated on May 5th, 2012, to highlight and promote all of the parks within the town. Events included dedication of a pedestrian bridge over the Taconic State Parkway, many guided history and nature interpretive hikes, a guided mountain bike ride, geocaching activities, and a fishing derby (see attachment).

David DeLucia, LA, Director of Park Facilities for the Westchester County Department of Parks, Recreation, & Conservation offers the following: “Jane has worked tirelessly in the pursuit of open and safe public trails throughout Westchester County. Her willingness to listen and empathize with other trail users has enabled her to unify the hiking and mountain bike groups into a community of volunteers able to create and maintain the splendid Yorktown Trail system.”