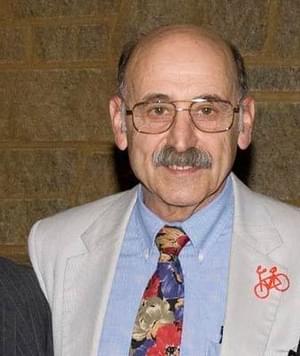 Ivan Vamos retired in 1993 as the Deputy Commissioner for Planning and Development for NYS Office of Parks, Recreation and Historic Preservation (OPRHP) where he was responsible for land and water resource management, development, planning, construction, land acquisition, and environmental programs for more than two decades.

He worked for State Parks, Conservation, Transportation agencies, the military and private firms for 48 years. During his tenure with State Parks, Ivan was more than a Deputy Commissioner but a person who was a true advocate for trails from the office and in the field.

During his decades with OPRHP, Mr. Vamos planned and implemented several new State and Federally funded programs including the initiation of the 500 mile Statewide Canals Recreationway program, completion of approximately 300 miles of “rail-trails”, relocation of approximately half of the Appalachian National Scenic Trail in NY State from “handshake” alignment agreements to trail routes owned in fee, and represented the State on Appalachian National Scenic Trails Advisory Council. He helped establish the Federal Highway Administration funded “trail” grant program in the State and the Hudson River Valley Greenway Watertrail.

The actions of other agencies too were impacted by Mr. Vamos’ involvement. When the NYS Thruway’s Schoharie Creek Bridge was tragically washed out in a flood, Ivan arranged for a then recently purchased OPRHP rail bridge to be used for the temporary emergency route (and thereby got the bridge put into top shape for a future bike trail). He also persistently advised NYS Department of Transportation that the new barrel of the I-84 Bridge required a trail crossing. Municipalities and construction unions supported this need and as result, today people can walk from Newburgh to Beacon across this Hudson River Bridge.

As an added task before retirement, Mr. Vamos donated extra personal time to call together, establish and Chair the Metropolitan NY Area Bikeway – Walkway Working Group. This quasi official body included 14 State, City and Federal representatives, a similar number of Non-governmental Organizations and well known experts. A Greenway Plan for NY City, published in 1993 was one of this group’s products, including 37 project elements and many Citywide programs. Much of this plan has been implemented by this date, leading to a nearly complete, connected City-wide Greenway. The “Bikes Belong Coalition” recognizing NY City in 2010 as a “bronze bike-friendly” City is one result of this effort. This investment is paying off in more bicyclists and pedestrians enjoying their city; New York Metropolitan Transportation Council, the NY Metro Metropolitan Planning Organization, reports city-wide cordon counts show an average of 30% more bicyclists using the City routes in each of the past two years (a 70% gain in two years!).

Also in retirement and as a Board Member and Chair of NY Rivers United, Ivan continued to advocate for improved River access, especially in the many locations constrained by ancient hydro-electric generation sites that were applying for new licenses. Another organization he supported for decades as a Board Member specializing in working with transportation agencies, the State Legislature and other entities was the NY (State) Bicycle Coalition (NYBC.net). In this capacity, he recently negotiated for bike-friendly road shoulders as well as sidewalks in the new bridge across Lake Champlain between Crown Point NY and Chimney Point VT (no such safe bicycle/pedestrian crossing existed before).

The plan for a new bridge at Tappan Zee also includes a bike/pedestrian trail, in part due to Mr. Vamos’ dedication to trail advocacy. He is currently working with a coalition of 23 other organizations to pass State legislation supporting the “Complete Streets” legislation (NYS A-8587-A, S-5711-B). As a bike-commuter for 45 years, an advocate and technical expert, Ivan has the experience needed to demonstrate the need for this Bill to the involved legislators, and possesses the administrative background to discuss practical implementation options with transportation and other agencies that will advance these Bills. He also represents bicyclists and is an active participant on NY Statewide Trails Council.

A Certified Planner (AICP), Ivan Vamos Chaired NY Rivers United and their work on Hudson River power plants and tributary issues. He served on the State’s Canals Commission, identifying projects that advance the management of several canalized rivers, and served as the State’s lead for harbor development and barrier beach protection. He is a life member of the National Ski Patrol, a life member of the NY/NJ Trail Council, ADK, the Appalachian Trails Conference and other groups. Mr. Vamos bikes, hikes, sails, kayaks and swims enjoying the resources he helped to preserve, or still hopes to help preserve. One of Ivan’s additional winter activities, distance ice skating along upstate rivers and lakes, adds yet one more trail activity worthy of consideration. Also after retirement he worked with project development, erosion control and tourism programs in the Northeastern US, Kerelia Russia (a “Blueway” tourism, waterway and campground route across Scandinavia and northern Russia), coastal and fringe coral protection in Barbados, and transacted land claims in Hungary.

Before State service, his work included serving as Port Control Officer for Reykjavik, Iceland and work as an Engineering Geologist in the US and Australia. Mr. Vamos has a Master of Science degree in Urban Planning from Columbia University School of Architecture, and completed the course-work for a Doctorate in Public Administration at the State University at Albany. He is a naturalized citizen originally from Budapest, Hungary and his wife is also a naturalized citizen from the Netherlands. They have three children and four grandchildren; who are all are equally enthusiastic about trail, bike and waterway activities as Ivan.