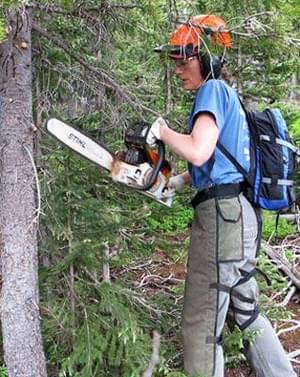 Kerrie Brokaw Pattison grew up in a family of trail builders, and all around her people were enjoying trails, for hiking, bicycling, and motorcycle riding.

Every year as a youngster growing up, a major trail building project in the mountains of Colorado was part of the Brokaw family’s summer plans. Many of those trails became established and sustainable multi-user links that are used regularly to this day by many recreationalists from the Colorado Springs area.

Kerrie learned early on the importance of building trails that will last a long time, with a minimal of maintenance. Several times, miles of cut had to be hacked out of hard rock hillsides on projects lasting years, simply to create a sustainable single track connection. All this prepared her for an adult life of planning, developing, building, and maintaining a trail system of her own design.

In 2005, Kerrie married Roger Pattison and moved to his home in Taos Ski Valley, New Mexico. She felt very strongly that the mountains surrounding the ski valley offered four seasons of recreational opportunity that needed only be developed, and so immediately began converting the small mountain village into a bicycling destination. As an avid mountain bike rider the most likely place to begin her quest was to look for trail building opportunities on 1200 acres of her husband’s family land, lying opposite the ski slopes on the sunny side of the valley.

Kerrie, Roger, and their two mountain dogs spent days hiking through the woods looking for contour benches, game trails, old mining and logging roads, and even older hunting or herding paths. At first, it was pretty easy to clean rocks and deadfall off of the grassed in logging roads from the 1960’s, and a couple of rideable loops were created. Then came more hand clearing to reclaim some mining roads from the 1800’s, and to connect sections of game trails. As Kerrie began to ride on her bike a lot out in the forest, she recognized more and more ways to link sections of trails and road and began to develop a loop system. Starting fully in the summer of 2008, Kerrie felt there was a real opportunity to open a private recreational park for bicyclists, hikers, and even winter snowshoeing. From that decision, came another entire set of challenges for Kerrie to overcome.

There were already organized horseback and snowmobile tours being led on the property along some main forest roads and dedicated public trails within the Pattison land. Additionally, these dedicated public hiking trails needed to be considered an existing use to work around, and not necessarily a new mixture of uses on these trails. These hiking trails are some of the most heavily used in the public trail system in New Mexico and integrating well with that existing traffic was a priority for Kerrie. Next were the governmental considerations. Although a small municipality, the Village of Taos Ski Valley has planning and permitting rules for land uses within the incorporated boundaries. A formal plan review and permit application process was conducted through the village planner and the Planning and Zoning Commission before approval was awarded for Northside at Taos Ski Valley to open for business as a bicycle and hiking trail park. Full approval was also given for small trailhead facilities, staff parking, ongoing trail clearing, forest thinning, and access via public roadways.

Kerrie’s next, and perhaps most significant challenge was finding proper insurance for a privately owned recreational park, and shuttle service. Learning about the insurance business and finding a good risk partner was a major accomplishment in Kerrie’s process of development. It became the single most time intensive part of the process, and even delayed opening of the park for half of the summer in 2009. Kerrie’s persistence paid off, and her ability to network with bicycle enthusiasts around the country finally awarded her with a very good insurance relationship that should be a strong part of the business for years to come. This was a critical link in the risk management plan between the landowner’s, Northside, and the Village.

The Village Public Safety Department was actively involved in the permitting process as well, and a risk management plan was jointly developed that involved public safety services and all the appropriate access agreements. Many of the members of the Fire, EMS, Police, and Village Public Works departments actively enjoy recreating now on Northside. The Village has also become a promotional partner with Northside due to the relationships Kerrie has cultivated with the Chamber of Commerce and all the local businesses that wish to see more year around visitors.

Throughout this process of forming a business plan and implementing it, Kerrie was all the while continuing to add to the trail connections for the existing collection of old routes, and a pretty nice system of loops was beginning to form. As local riders began to experience these trails, they were also getting very excited about what was happening. Local bicycle shops and clubs in Taos put their full support behind Kerrie’s efforts and helped spread the word. The annual Frazer Mountain Madness bicycle race and festival that Kerrie has promoted through Northside since 2005 has also served to familiarize riders from a widespread area with the new trail system and park.

During the past two seasons, Kerrie has visualized, researched, designed, developed, and managed the construction of several more miles of specialized single track trail that is cut from the raw forest along beautiful contours. Kerrie has laid these latest trails out using her intimate familiarity with the terrain, a full awareness of what makes a trail fun for a bicyclist, and the careful study of contour lines on her planning map. Her greatest reward has been the chance to be the first person, or to see the first person, that puts a wheel on the new route.

As a graphic artist, Kerrie has been able to clearly communicate the scope and purpose of her park design. She created a visual tool in the form of a trail system map, with rules and suggestions as well as beautiful pictures, and has enhanced the image of the park with vivid graphics, logo, trailhead kiosk and welcome center, and hundreds of professional looking trail signs. Kerrie has been able to earn the support of the entire community with her passion for the project and enthusiasm for recreation.