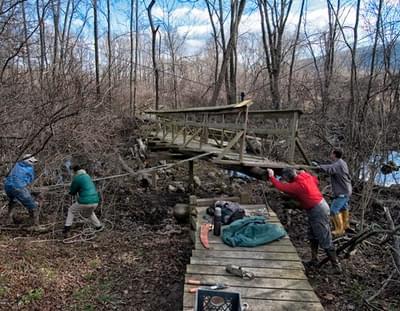 David and Monica Day are 30 year veterans of the New York-New Jersey Trail Conference and are the Trail Crew Chairs of the West Jersey Crew. Thanks to their dedication they have forever changed the condition of NJ’s trails for the best.

They started the season a little earlier this past year, with a post-2011 Christmas reconstruction of a bridge on the Appalachian Trail in Wawayanda that had been displaced by Hurricane Irene. That was only the beginning.

In Worthington State Forest, their crew relocated approximately one mile of the Appalachian Trail around Upper Yards Creek Reservoir. This relo was years in the making. Not only did it result in a more manageable tread surface, but shifting the trail from the south side of the ridge to the north side opened multiple trails. Last but not least, moving the trail took the trail off of private land and placed it on preserved, state lands.

Later in the year they restored and hardened a badly eroded section of the Appalachian Trail in High Point State Park. In Stokes, on the Howell Trail at the Big Flat Brook, the crew built stone bridge abutments to replace the structures destroyed last fall by Hurricane Irene. They then retrieved the missing 35' bridge from 700' downstream and rebuilt it on its new foundation. Last but certainly not least, David, Monica and crew took to boats and chainsaws to address a log jam of debris from Hurricane Irene that had collected and was threatening the bridge the AT uses to cross the Pochuck Canal in Wawayanda State Park.

There is no project too large or small for David and Monica. Their expertise and professionalism amaze the Trail Conference staff on a regular basis. They truly are the perfect Trail Workers.