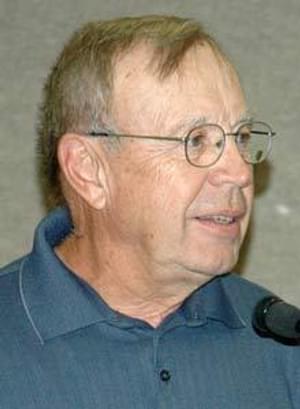 Lightner is a retired construction engineer and re-designed plans for 12 bridges on the Homestead Recreational Trail.

On Saturday mornings during the summer of 2007, decking and side rails were installed on bridges along a 13-mile segment of the Homestead Recreational Trail between Lincoln and Cortland, in southeastern Nebraska. The owner of the stretch, the Lower Platte South Natural Resources District (NRD), furnished the materials. Lynn Lightner furnished the labor and by fall, when all 12 bridges had been completed, he had saved the NRD approximately $100,000. The money saved was not all in labor. Lightner ire-designed plans for each bridge, making it easier for volunteers to do the installations using fewer materials.

A large local trail group, the Great Plains Trails Network, pledged thousands of dollars in in-kind help and Lightner was given their e-mail addresses. Every week, Lightner would send an e-mail to the group of volunteers, specifying what bridge was being targeted that week, and every Saturday morning the volunteers were there. They started at daylight; Nebraska summers are hot AND humid. By August everyone knew the drill and the crew was installing railings to good-sized spans in under two hours. That kind of well-organized effort would never have happened without Lightner’s meticulous coordination. Oh yes, there was much more to his weekly preparations than sending an e-mail. When volunteers arrived at a bridge to begin work, the materials they’d need were already there. So was everything else they’d need; generators, a table saw station, drills, framing levels, hardware, water; all there thanks to Lightner’s steadfast dedication.